Maiden voyage with the 'popper'

The stars aligned and our new friend Brian decided to sell his Vagabond Outdoors camper at the exact same time that we were looking to buy one. We were actually on the waitlist for a similar camper for 8 months already and cancelled because we got tired of waiting. There's lots of names for these types of campers, but we just call them "poppers". 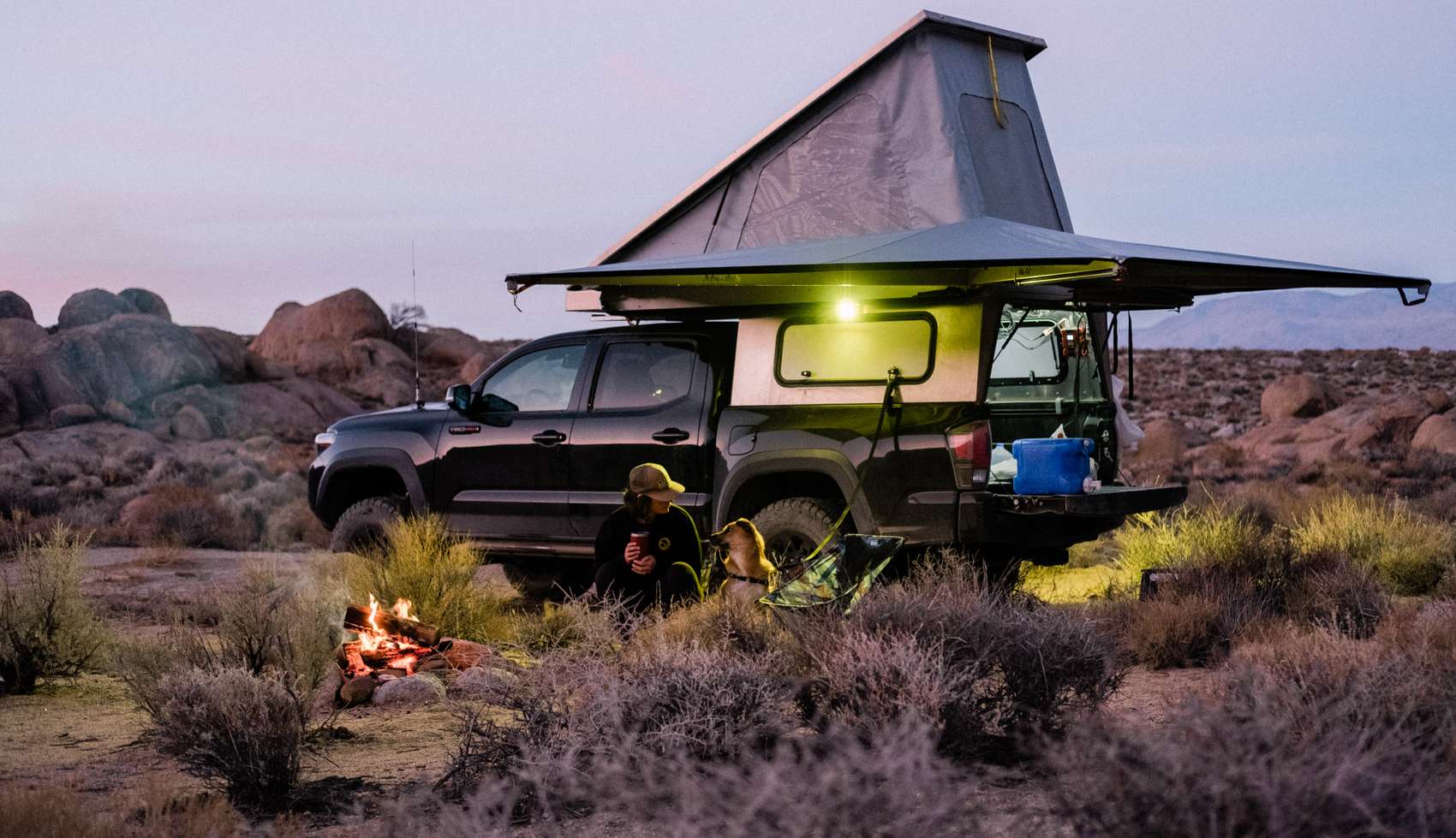 Camping from a truck is already luxurious, but this camper takes things to a whole new level. We can setup camp in less than a minute with solar panels, an awning, external lights, power for charging phones and cameras, a fridge, a fan, and a bed large enough for two humans and a dog. It even (barely) fits in our parking garage and we can leave stuff in the bed of the truck instead of removing everything after a trip. It's like having a Sportsmobile, except you don't have to drive a van. 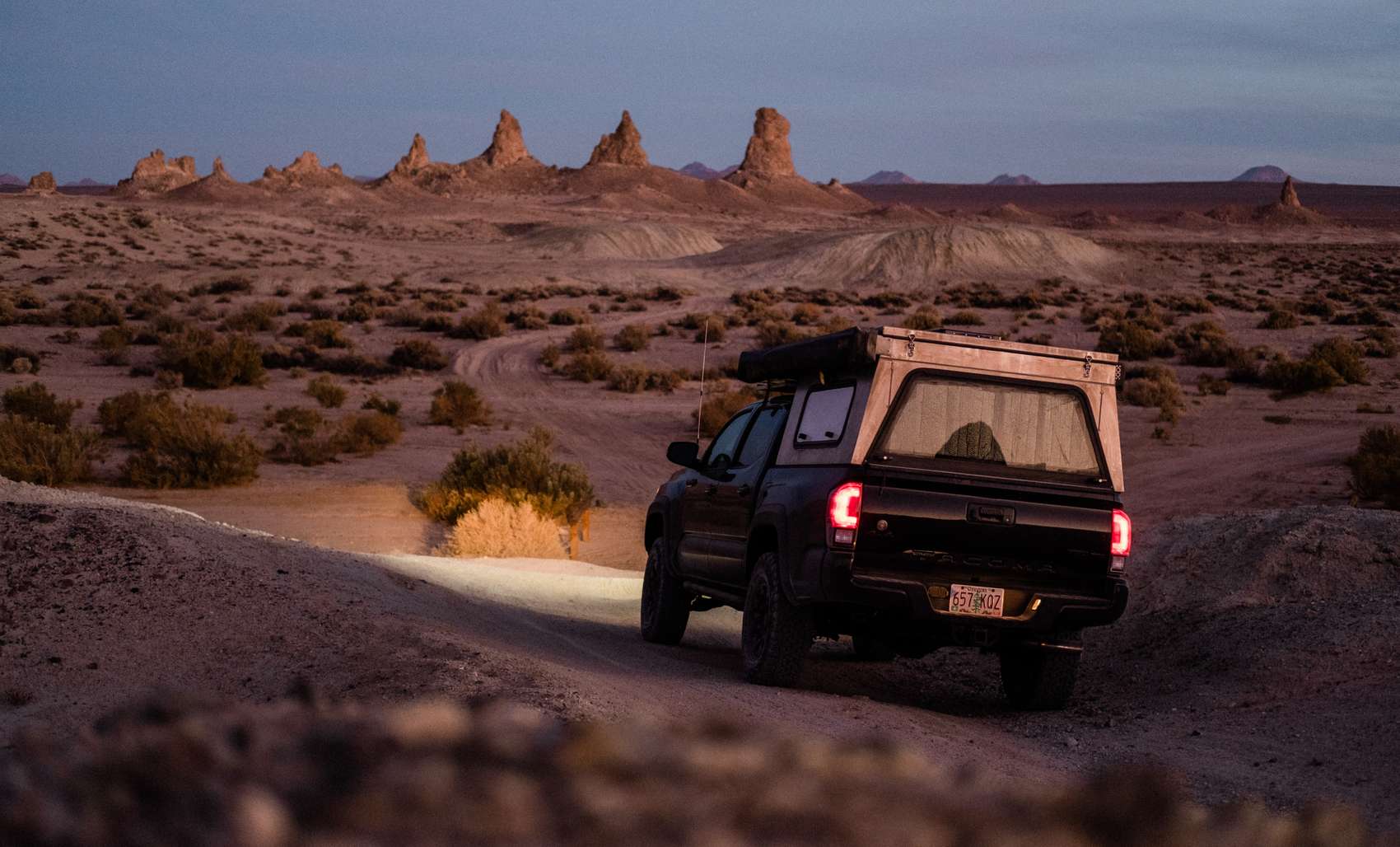 Louisa is a teacher and has some pretty long breaks around the holidays and summer. This past week, for Thanksgiving, we thought it would be fun to do a little road trip with the new camper. The previous owner (Brian) drove all the way to San Francisco from Texas and the folks at Vagabond Outdoors moved the camper from his truck to ours. We spent the rest of the day getting it ready for our trip. We cleaned the mattress, ran some electrical with help from UVS, and tossed in a fridge. The game plan: San Francisco to Trona to Death Valley. 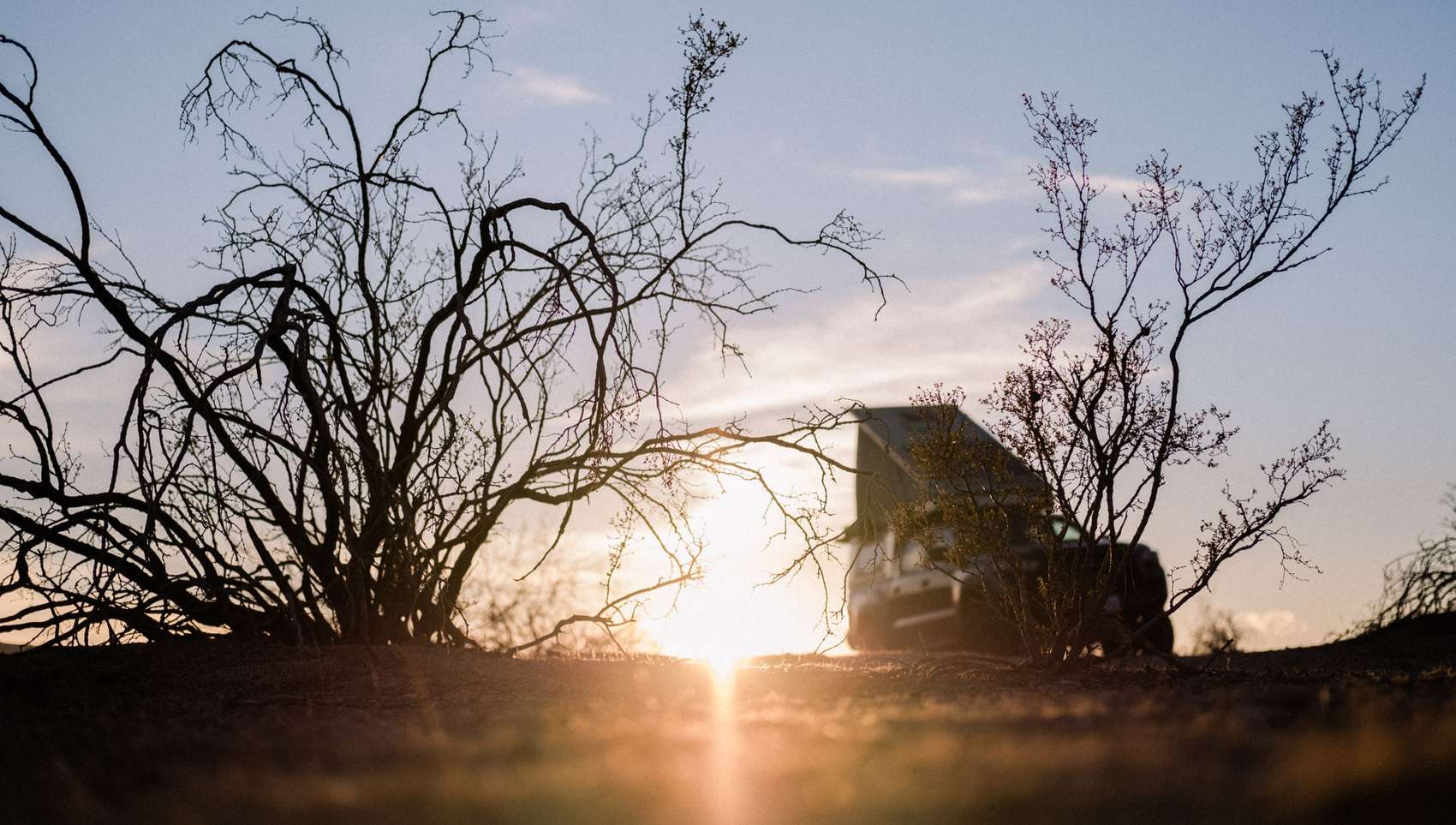 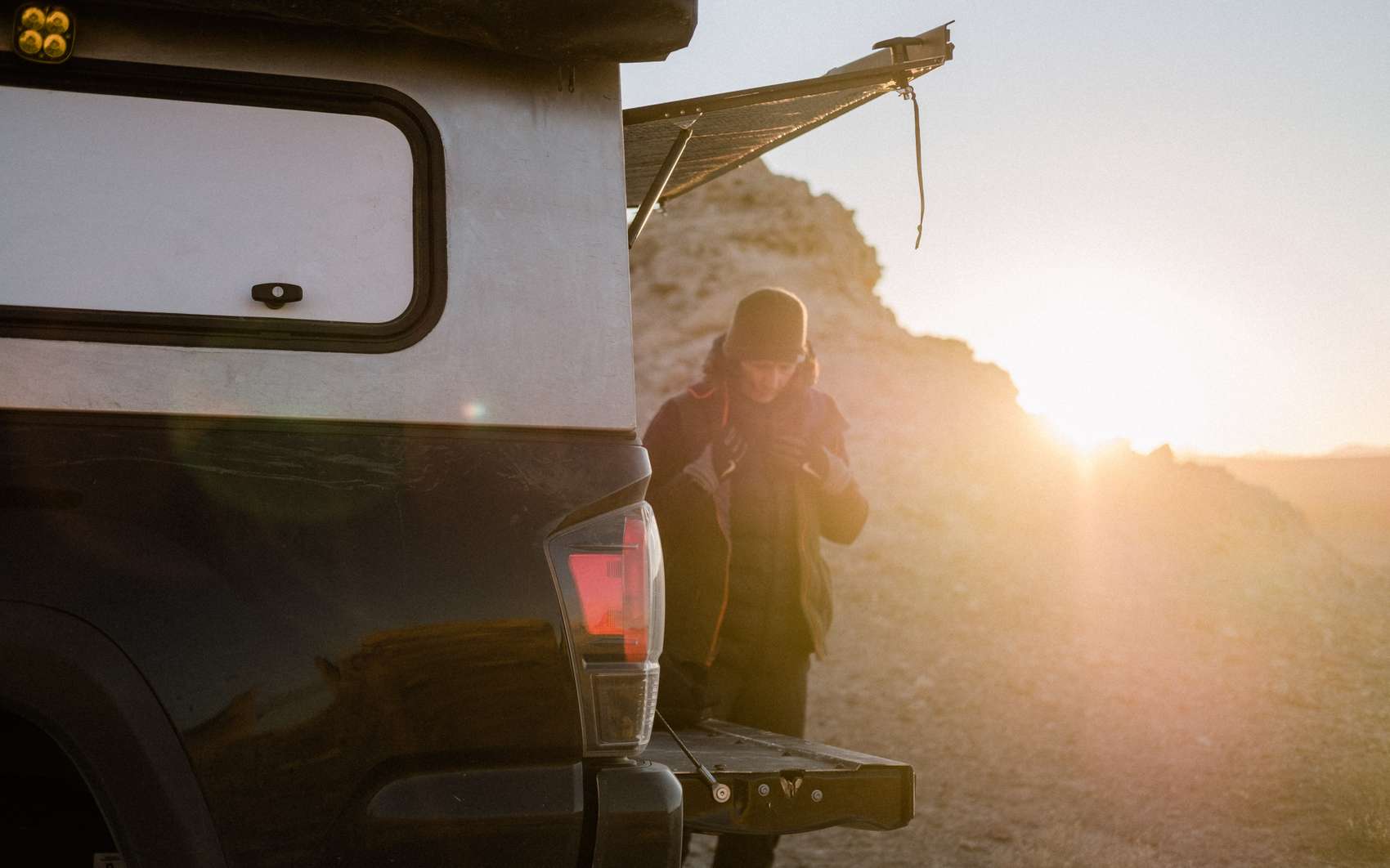 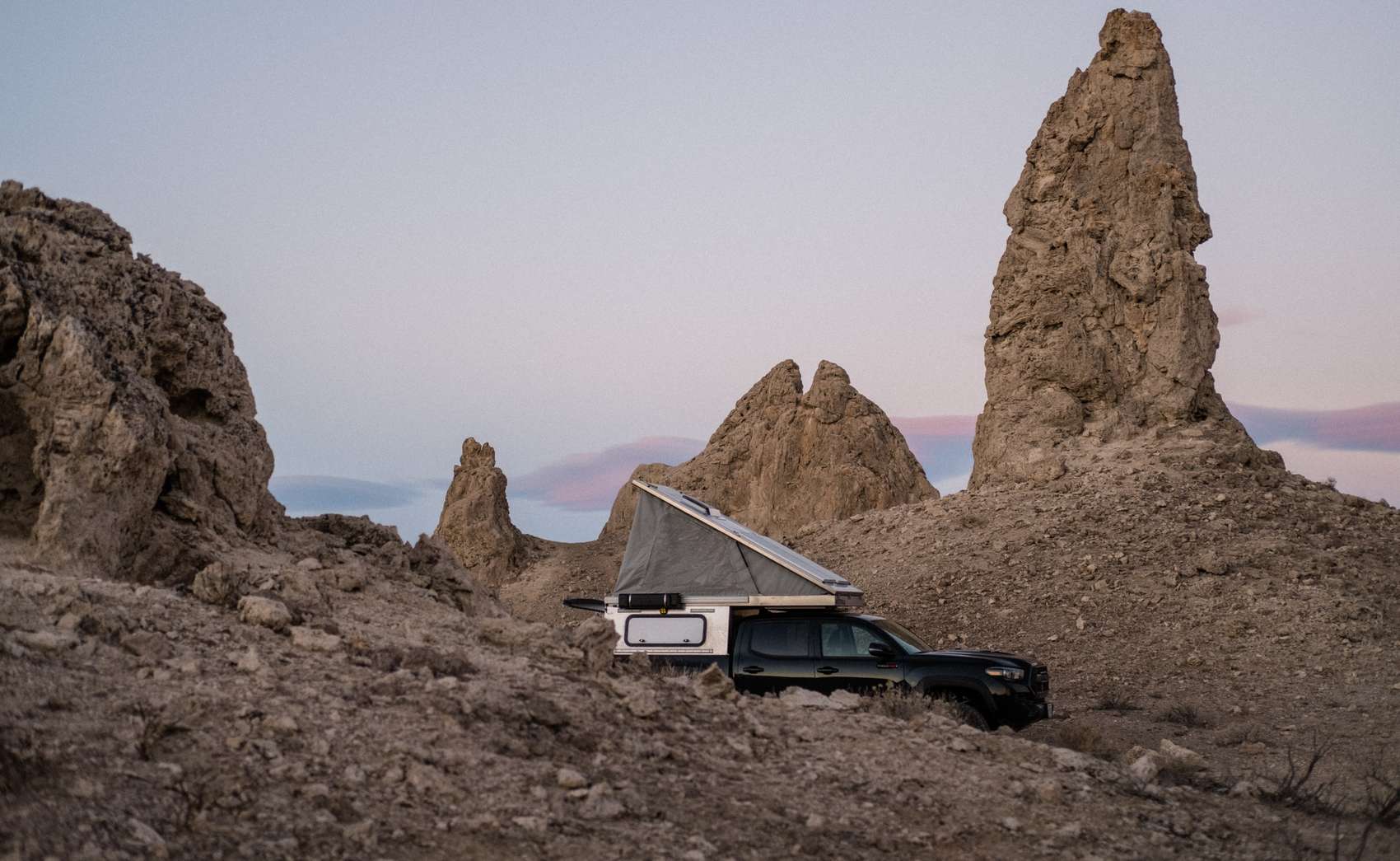 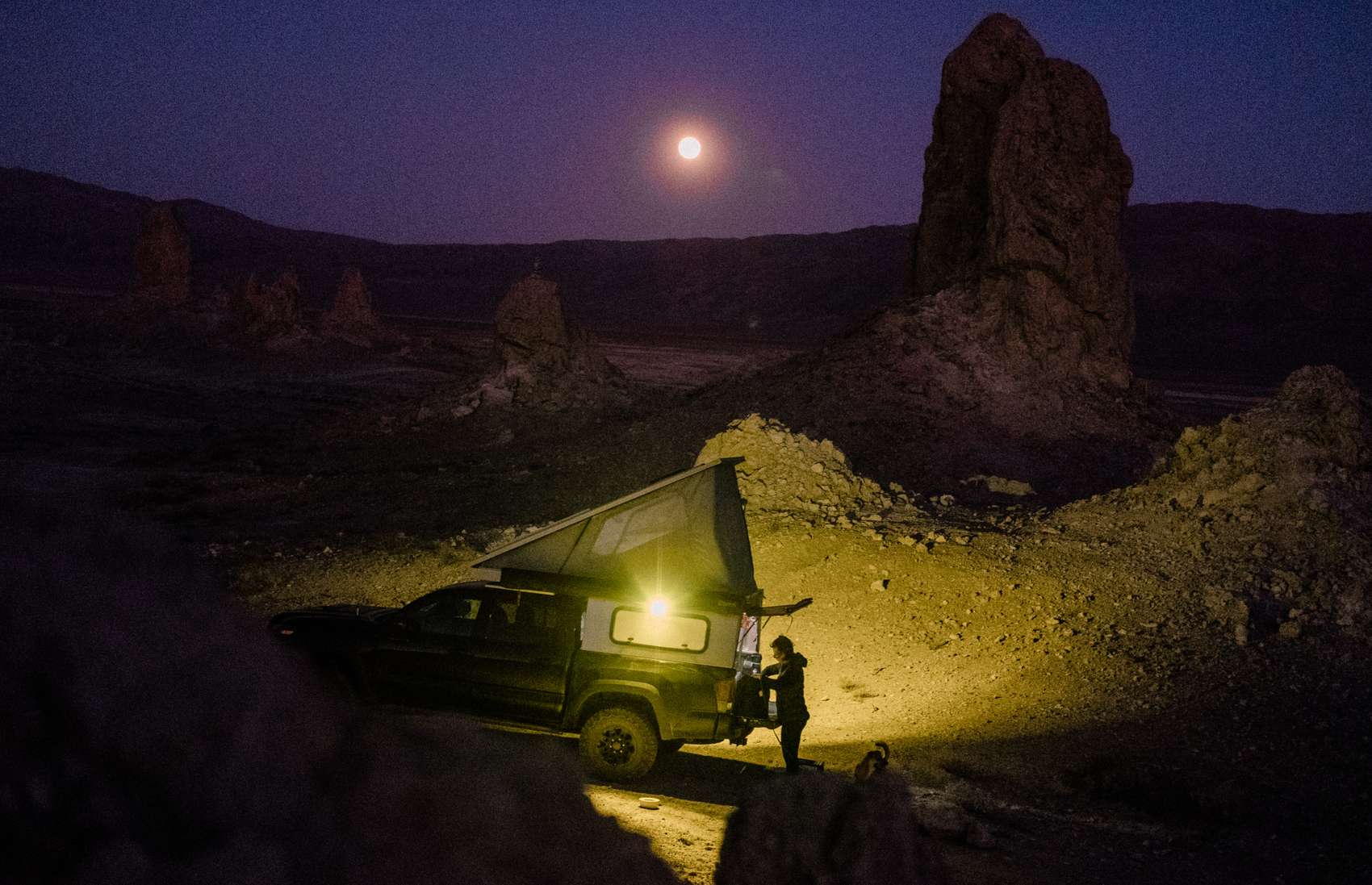 We drove from SF to Trona on Thanksgiving day and barely arrived before sunset (already appreciating the quick camp setup). The drive took around 9 hours. We spent the rest of the daylight just exploring the place looking for a spot to make dinner and sleep. We decided to eat a bird for dinner like everyone else and picked up a roasted chicken on the way to camp. We cut it up and heated it on the skottle with some asparagus. We went to bed around 6PM (felt like 10) and watched a movie. 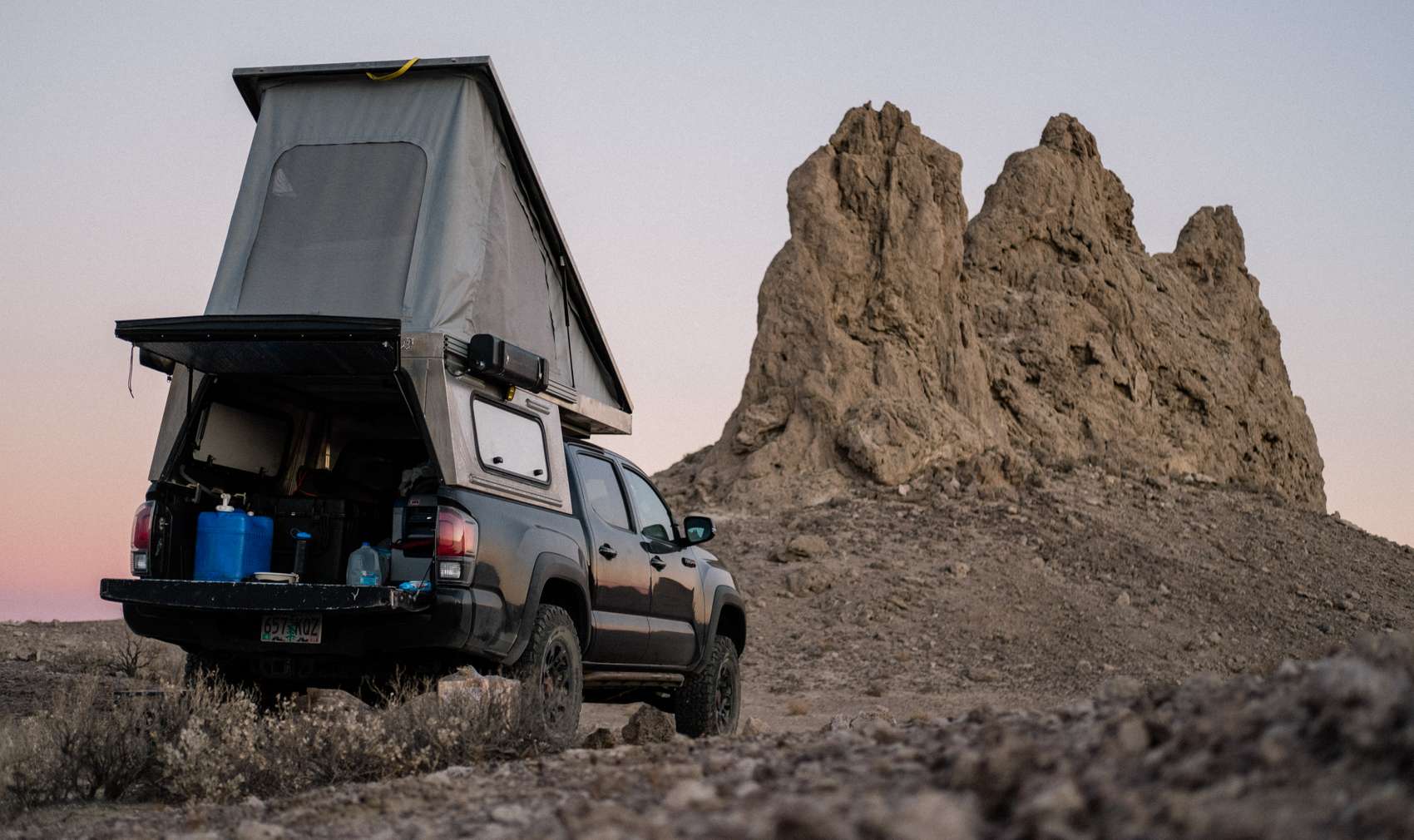 Sleep was good, but pretty sure Baxter spent most of the night on Louisa's side, so I had most of the bed to myself. We got up around 6AM, made some coffee, and took a few photos around camp in the morning light. I was worried about the battery dying overnight while I was charging stuff (and running the fridge), but the volt meter didn't even register a change, so plenty of juice I think. We're running everything off a second battery right now that's wired into solar and the alternator. 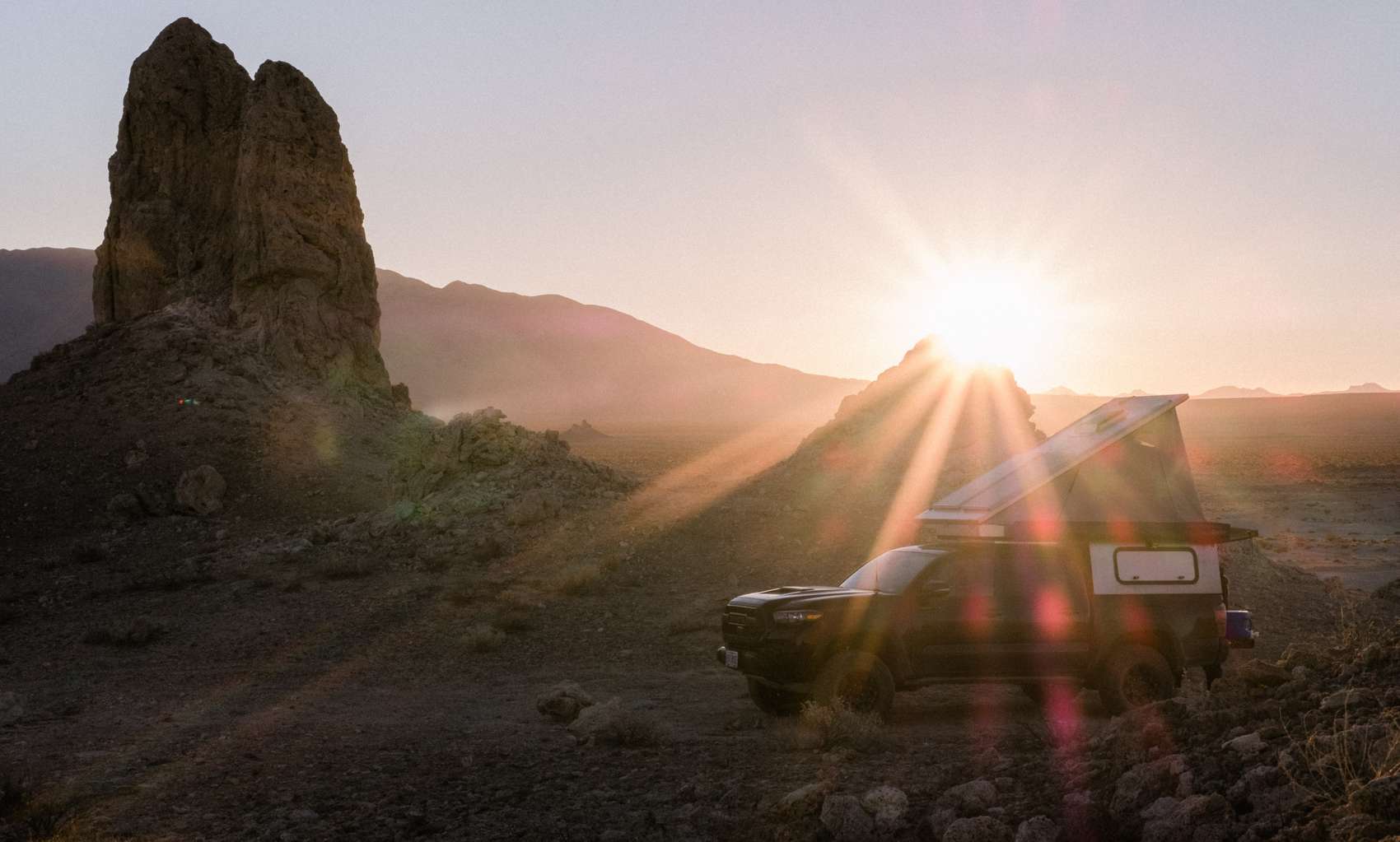 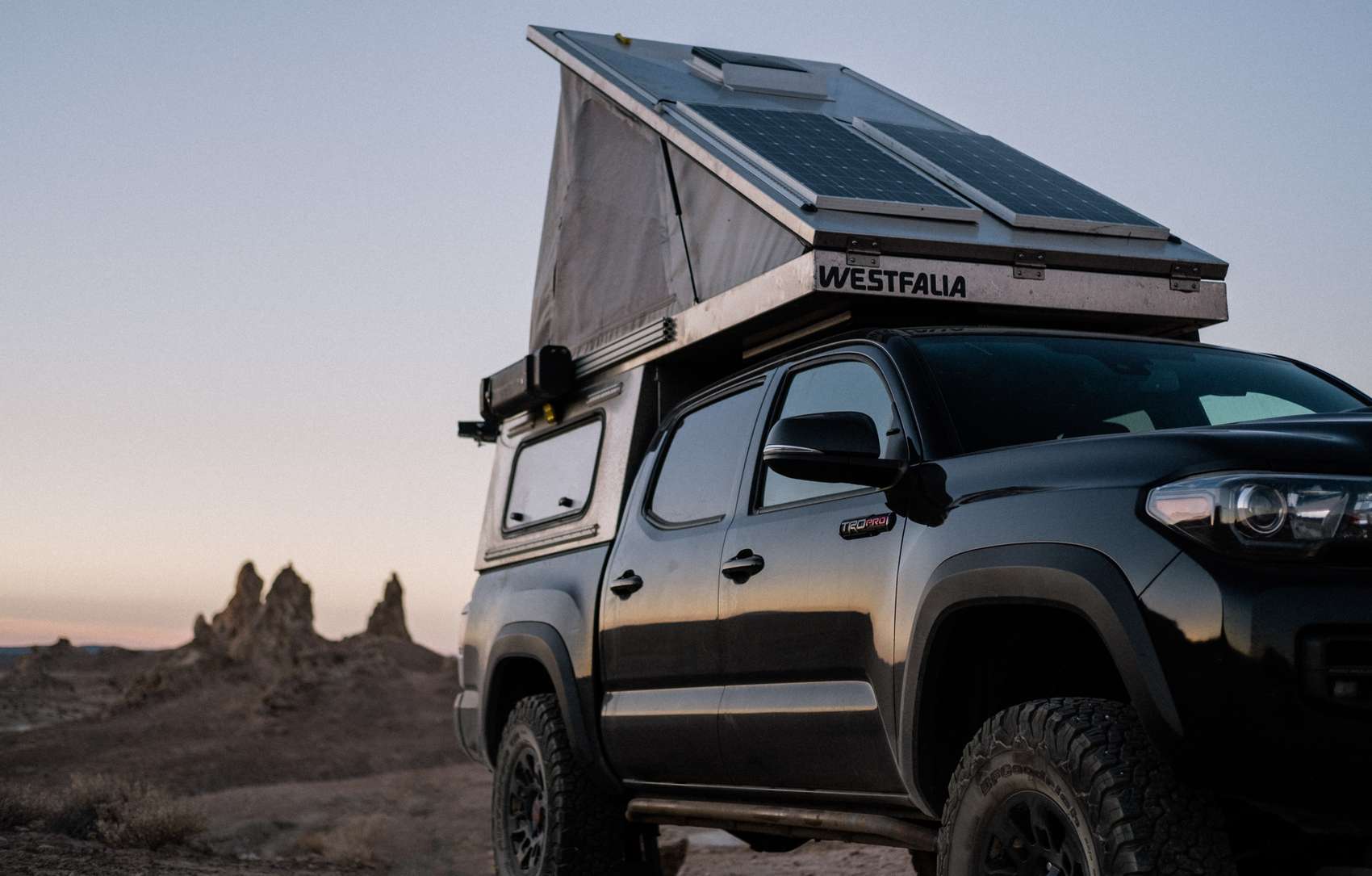 We've been skipping breakfast lately, so after coffee we took off and started the 1-hour drive to Death Valley from Trona. There was this giant group of folks from Overland Bound (15 rigs) parked at Panamint Springs waiting for gas, but the pumps were turned off and there was no ETA on when they would turn on again. We needed gas as well, so decided to just continue a bit North to Beatty Nevada and get gas and lunch in town.

After chili burgers at the "Happy Burro Chili & Beer", we left to head back into Death Valley via Rhyolite (ghost town), and the beautiful Titus Canyon. I did Titus Canyon many years ago on a large motorcycle, but was excited to try it on the truck. It was easier and faster than I remember, but super scenic. 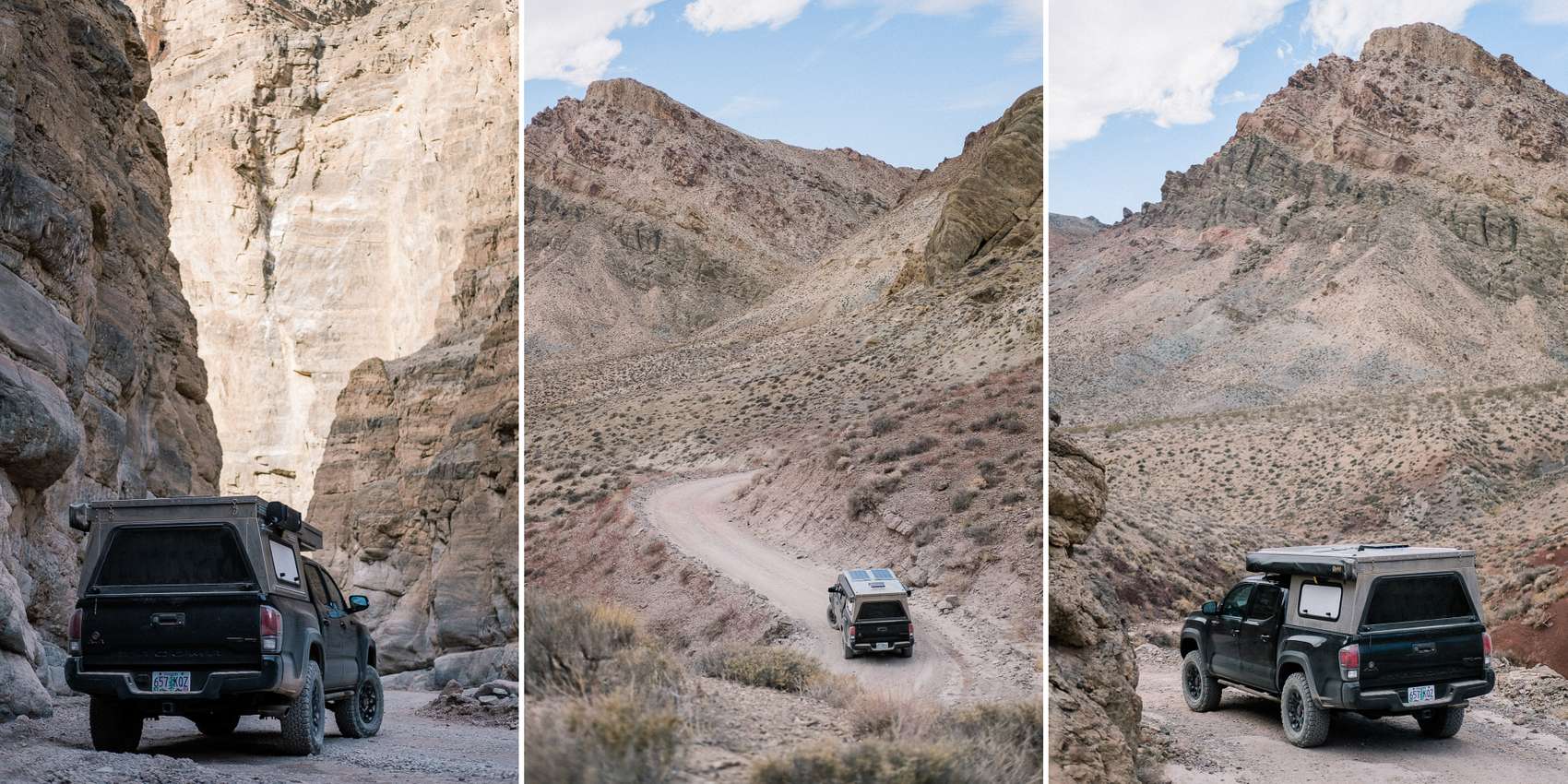 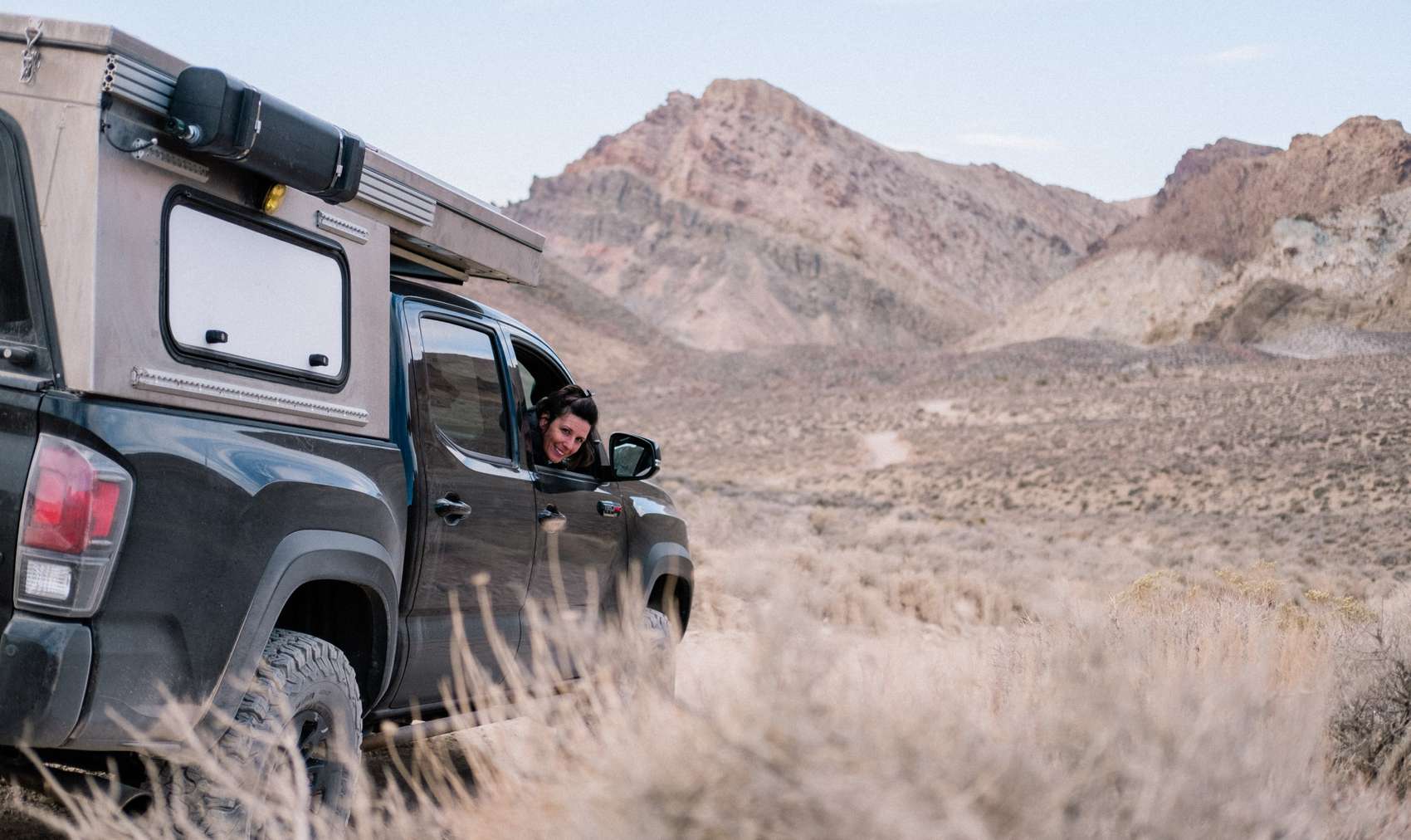 Death Valley is a national park so camping is a bit limited, but near the end of the day we tried exploring a lightly used road and found ourselves at the top of a pretty sweet lookout, so decided to setup camp there. In busy places like this, it's almost always a good idea to head up rougher roads when looking for camp because most people don't bother to explore them. This one started out pretty rough, so I bet that filters out a lot of folks. We saw evidence of a fire pit and some other tracks, so felt confident that we'd be OK here for the night.

Dinner was tacos and we headed to bed around 6-7PM again, no campfire tonight (it was very windy). I tried grabbing a few photos after the sun went down, but the camera shake was pretty bad and the cheap tripod I have wasn't helping. We watched another movie on the iPhone then fell asleep. 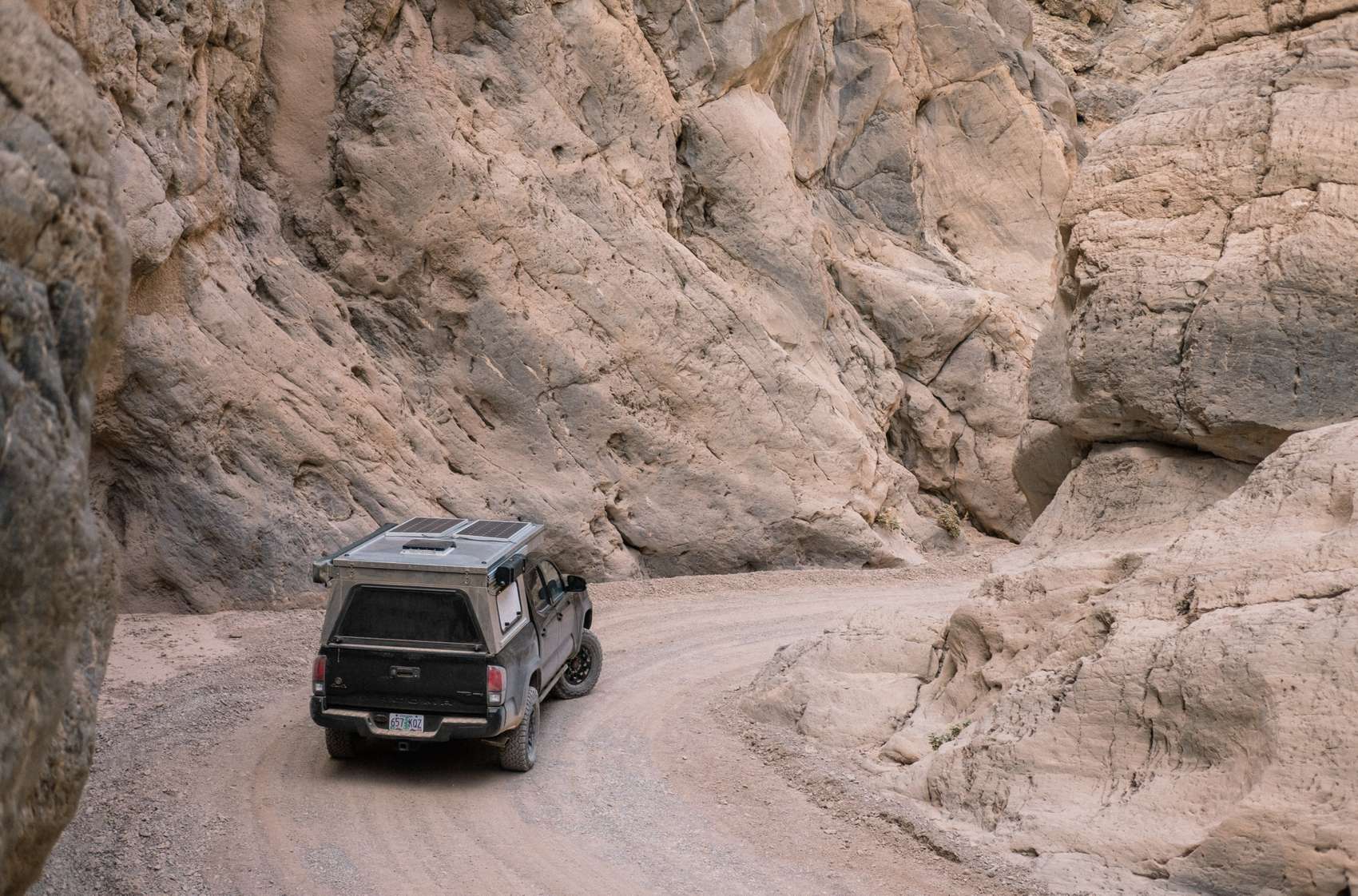 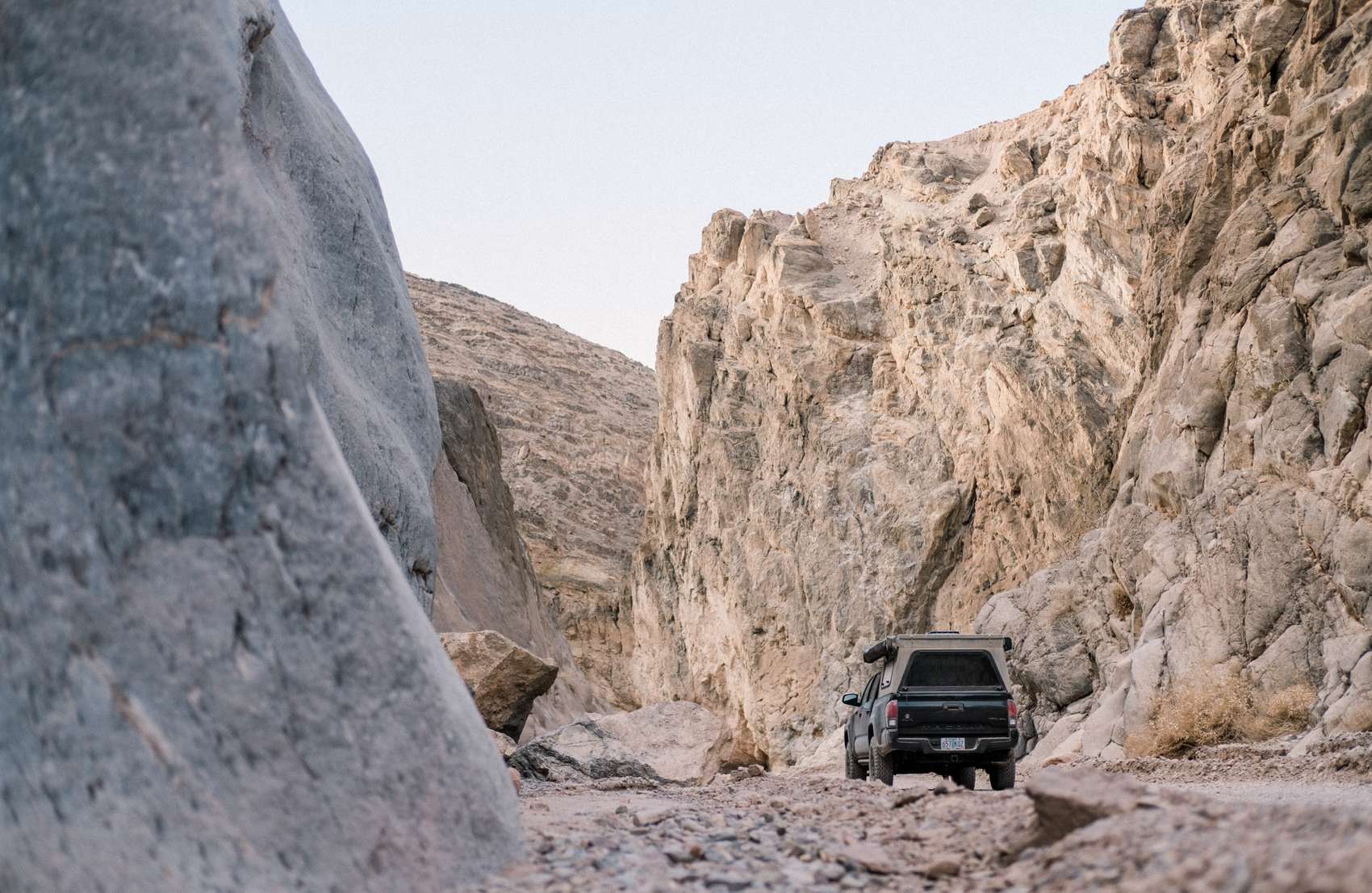 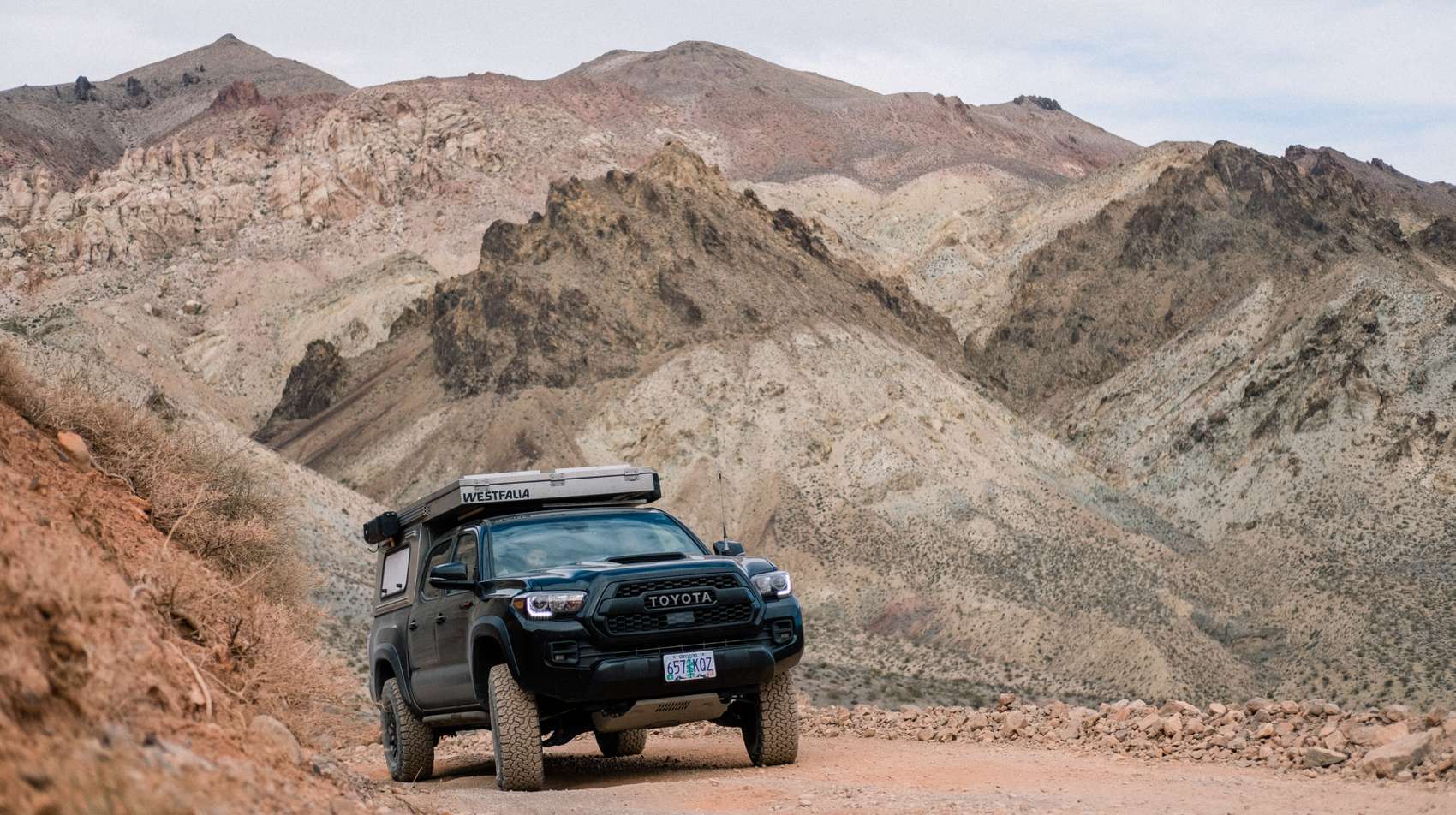 Early to bed, early to rise. We got up around 6AM again with the sun and started our way down the mountain towards the racetrack. This is an interesting chunk of playa, shaped like an oval, with a giant rock in the middle. It's called a racetrack because it kinda looks like a racetrack if you squint real hard and use your imagination. We got out of the truck to walk a bit and quickly got back in because it was kinda boring and Baxter wasn't allowed on the playa, so he was barking like crazy in the truck.

Our plan for the rest of the day was to head out towards Panamint Springs for gas, then "somewhere towards SF" for the evening. We had no idea where we were going to camp that night, but wanted to be out of Death Valley to shorten our drive up a bit in the morning. 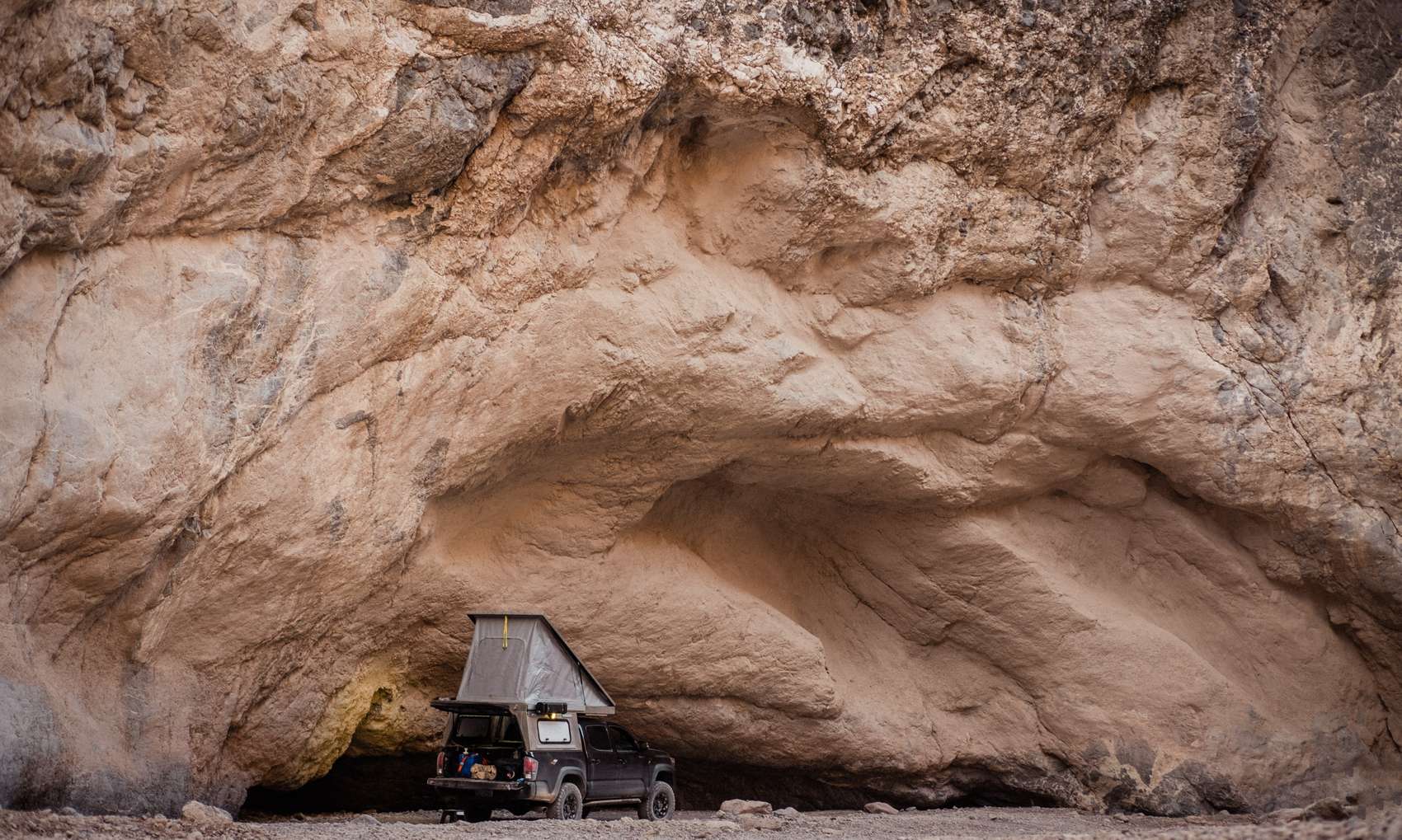 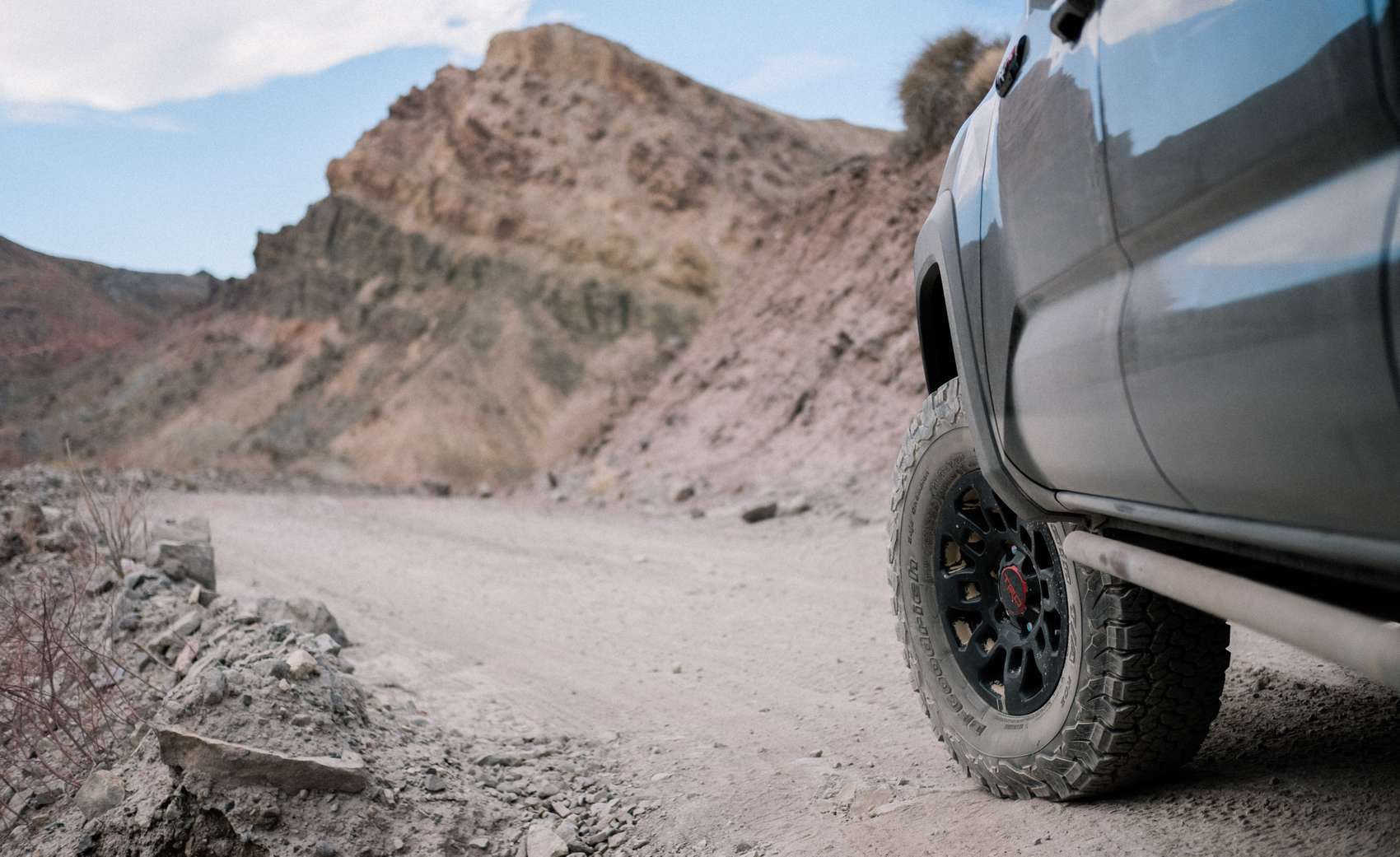 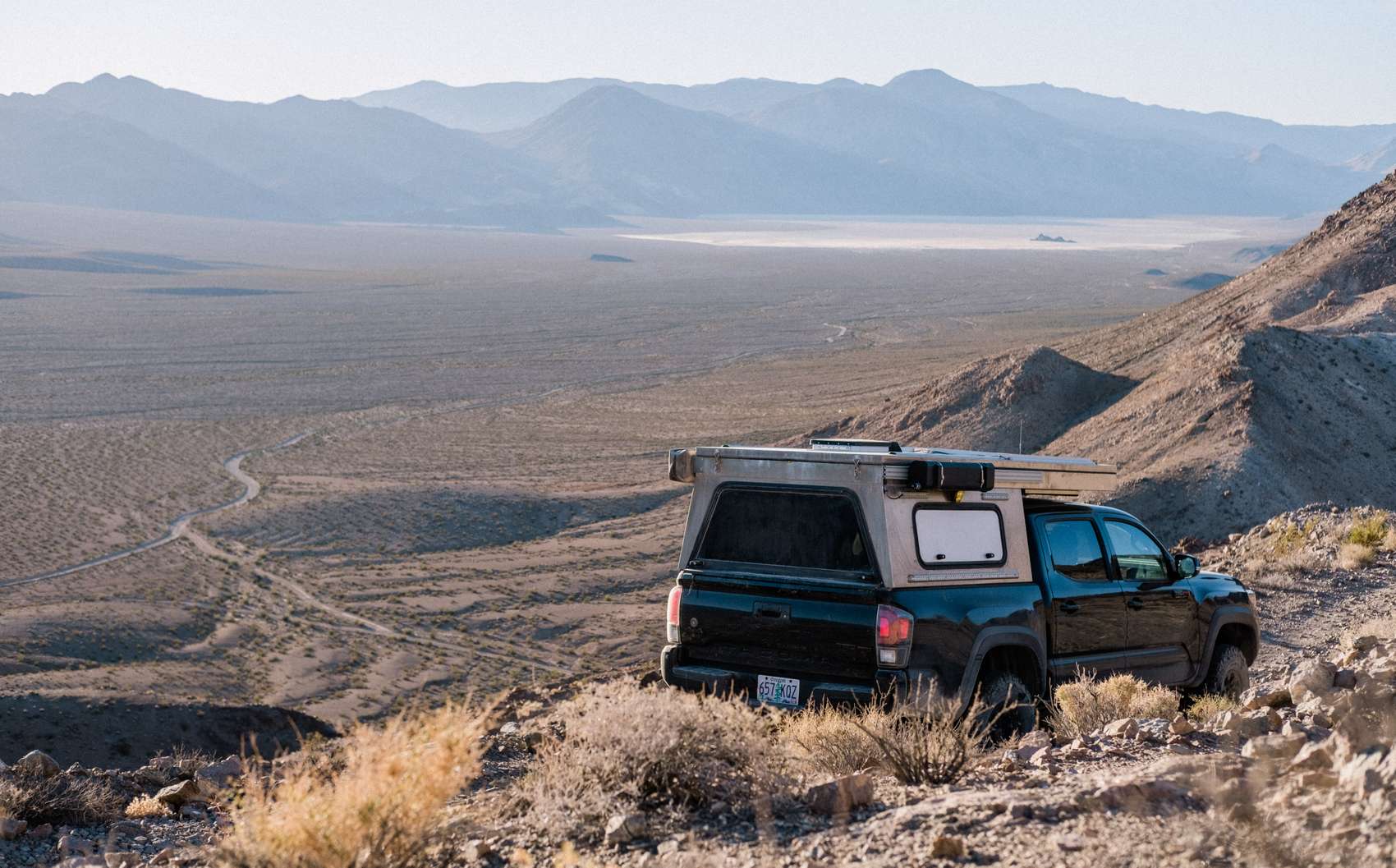 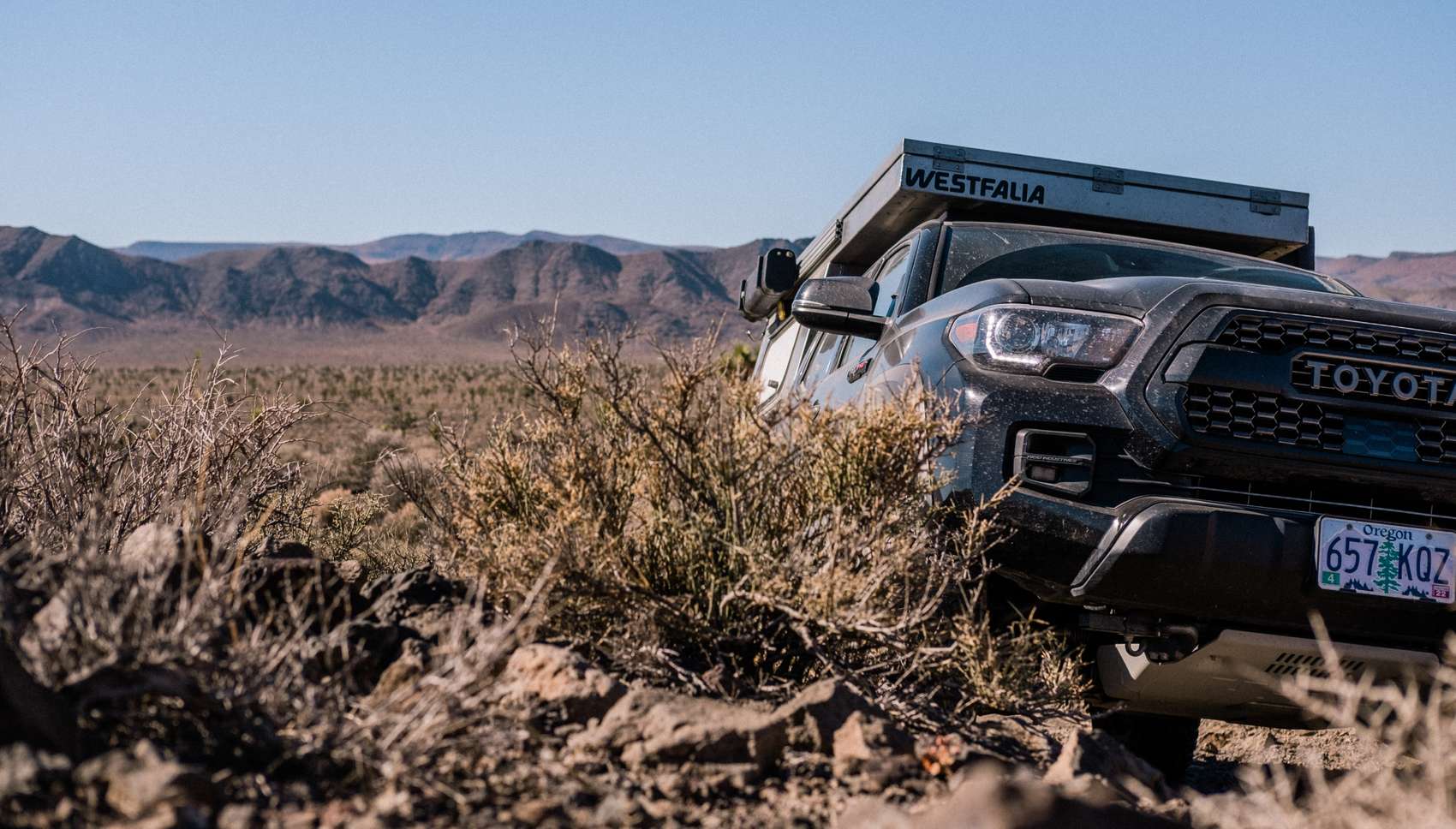 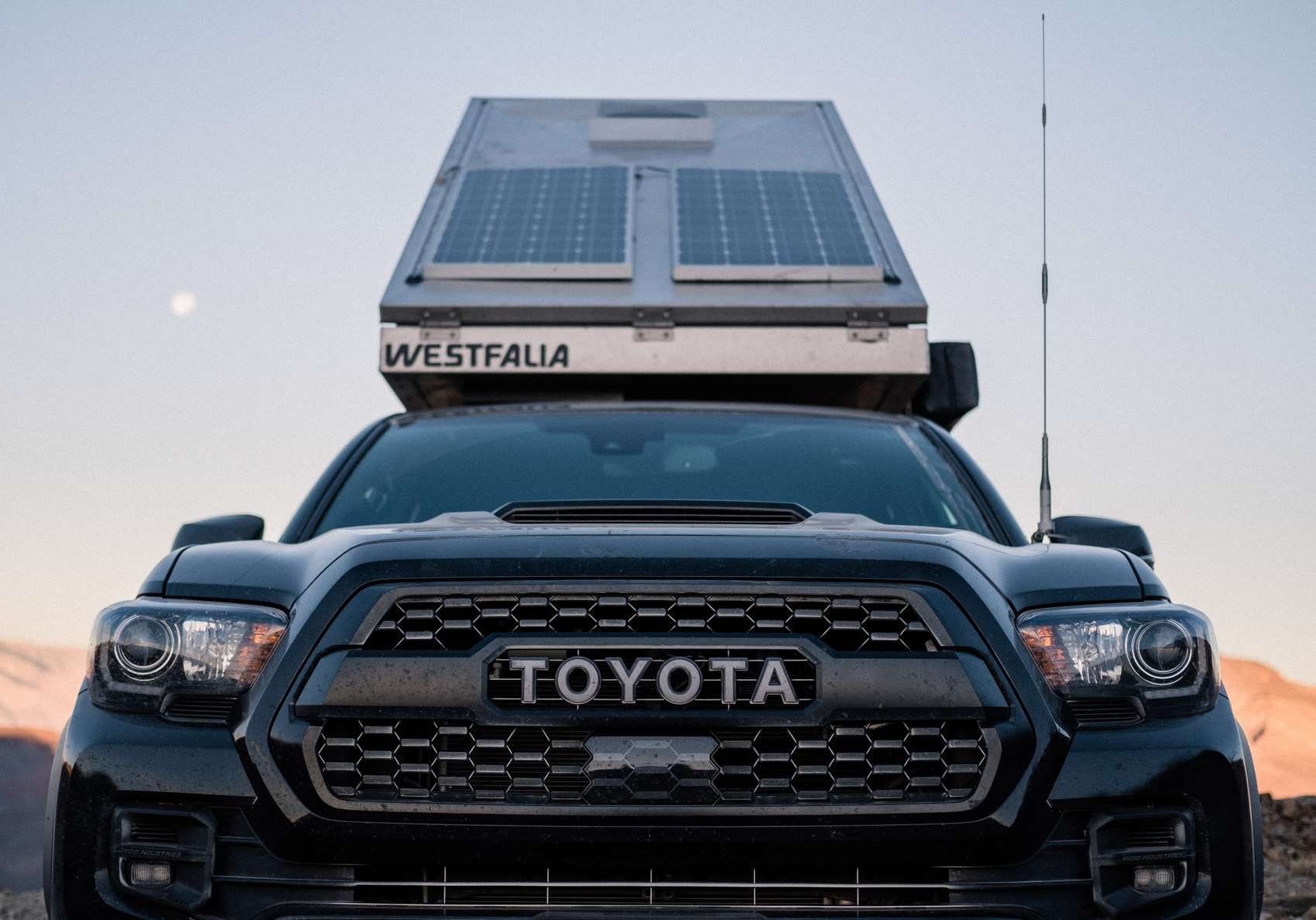 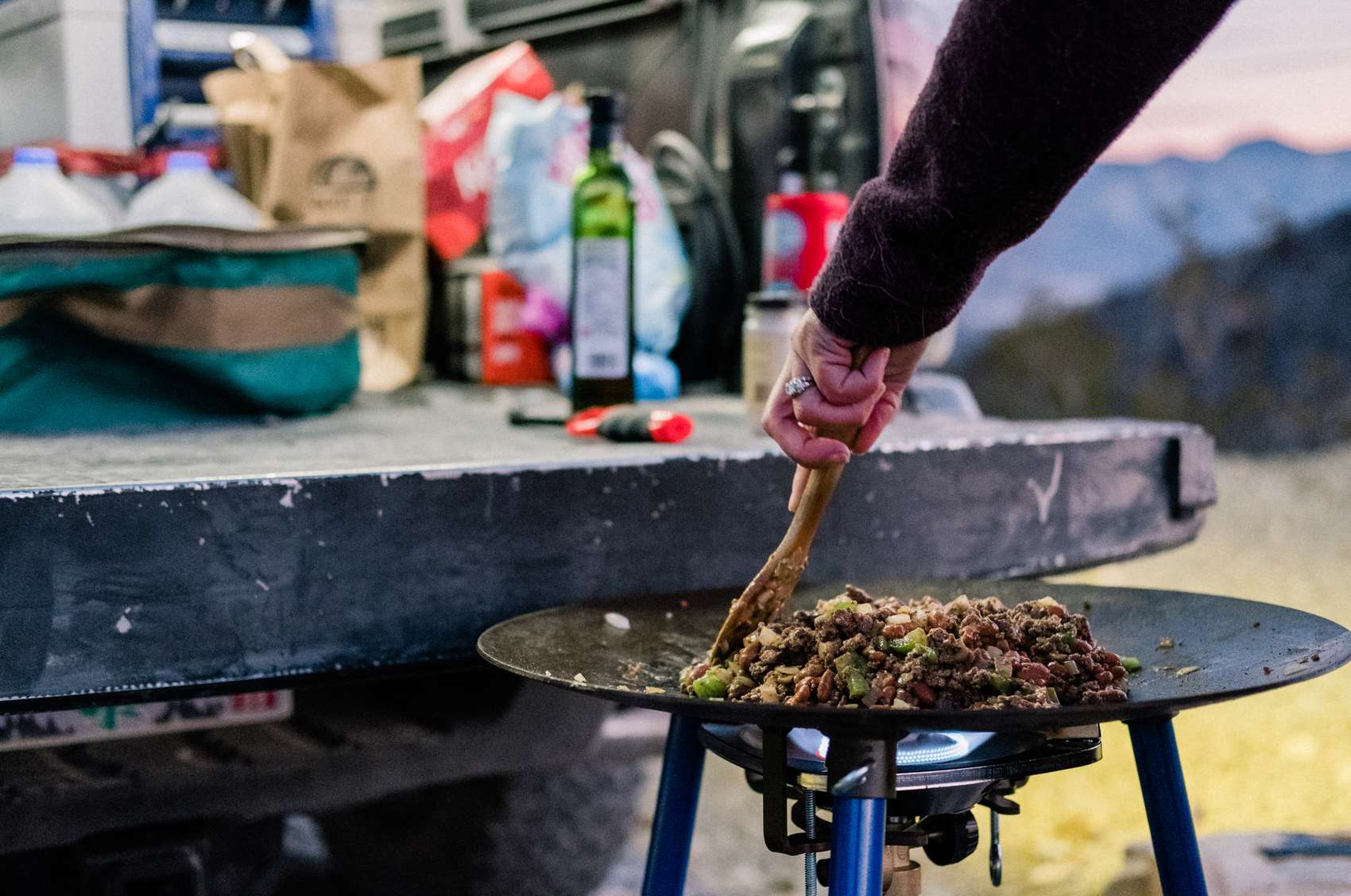 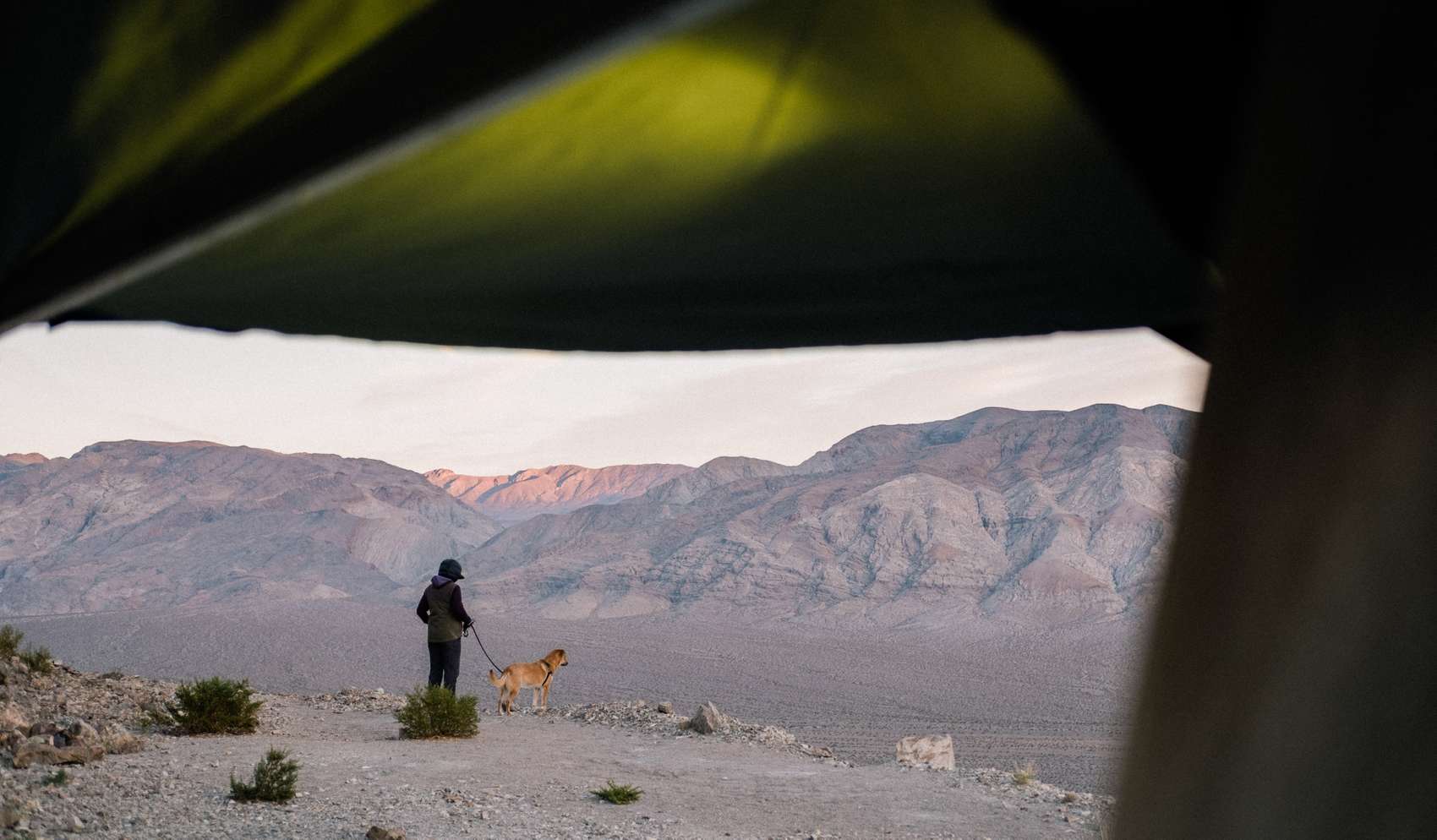 After the racetrack we hopped on Lippincott Pass and were pleasantly surprised by how fun it was. It's a two-way mountain road that is very scenic and has some texture that will keep you entertained. There were a couple off-camber turns that felt like we were going to fall over, but was otherwise a relaxing and fun drive that needed 4x4 and a touch of clearance. Watch out for oncoming traffic because there's not a lot of room to pass.

After Panamint Springs, we headed North on 395 towards SF and pulled over as soon as we had cell service to try and find some camping for the evening. I usually use the Camp & RV app on the iPhone because it makes it easy to find free camping. This app also caches its data so it can be used when offline. We saw a couple spots near Lone Pine, and never heard of it, but decided to head there for the night. 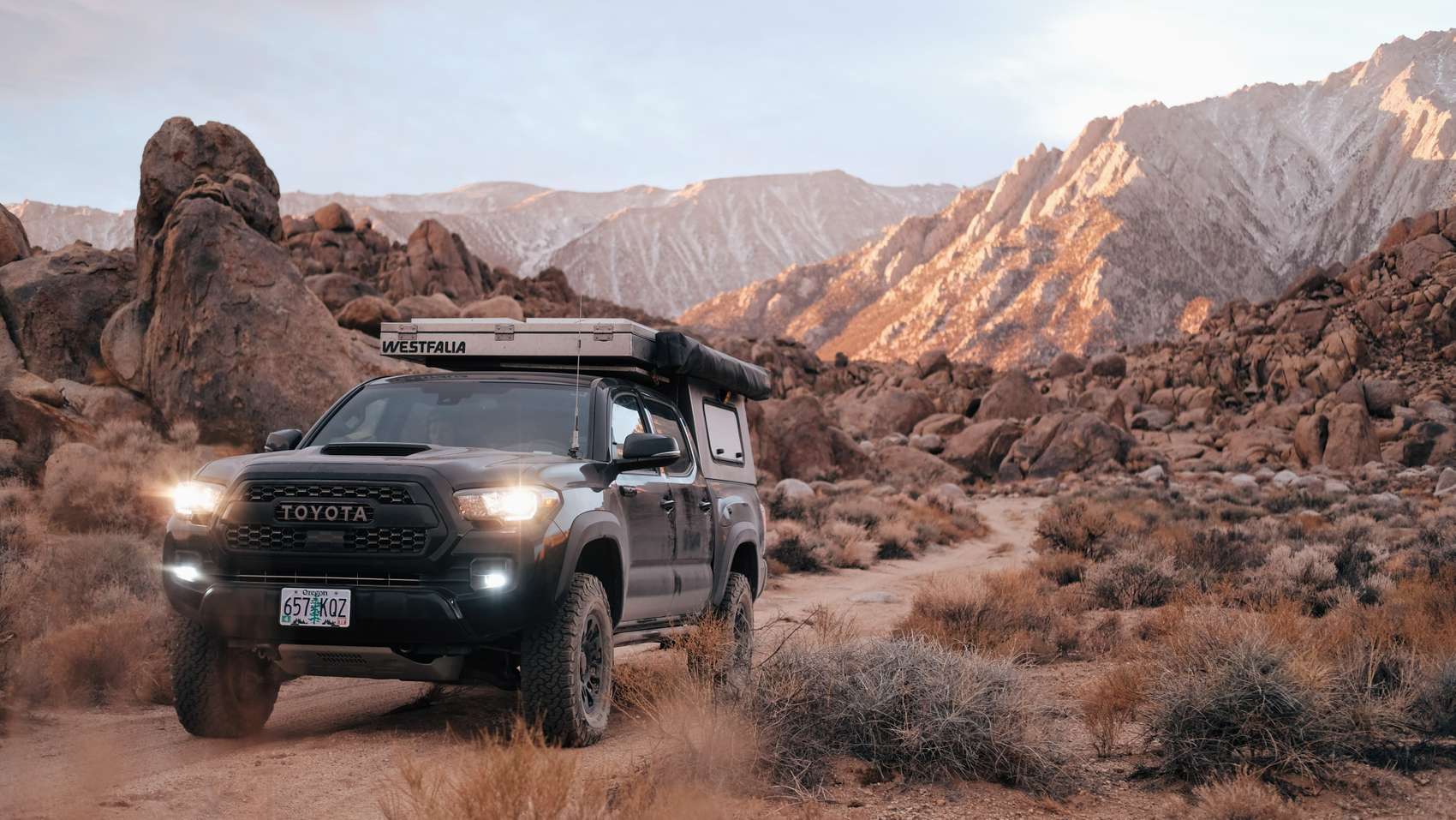 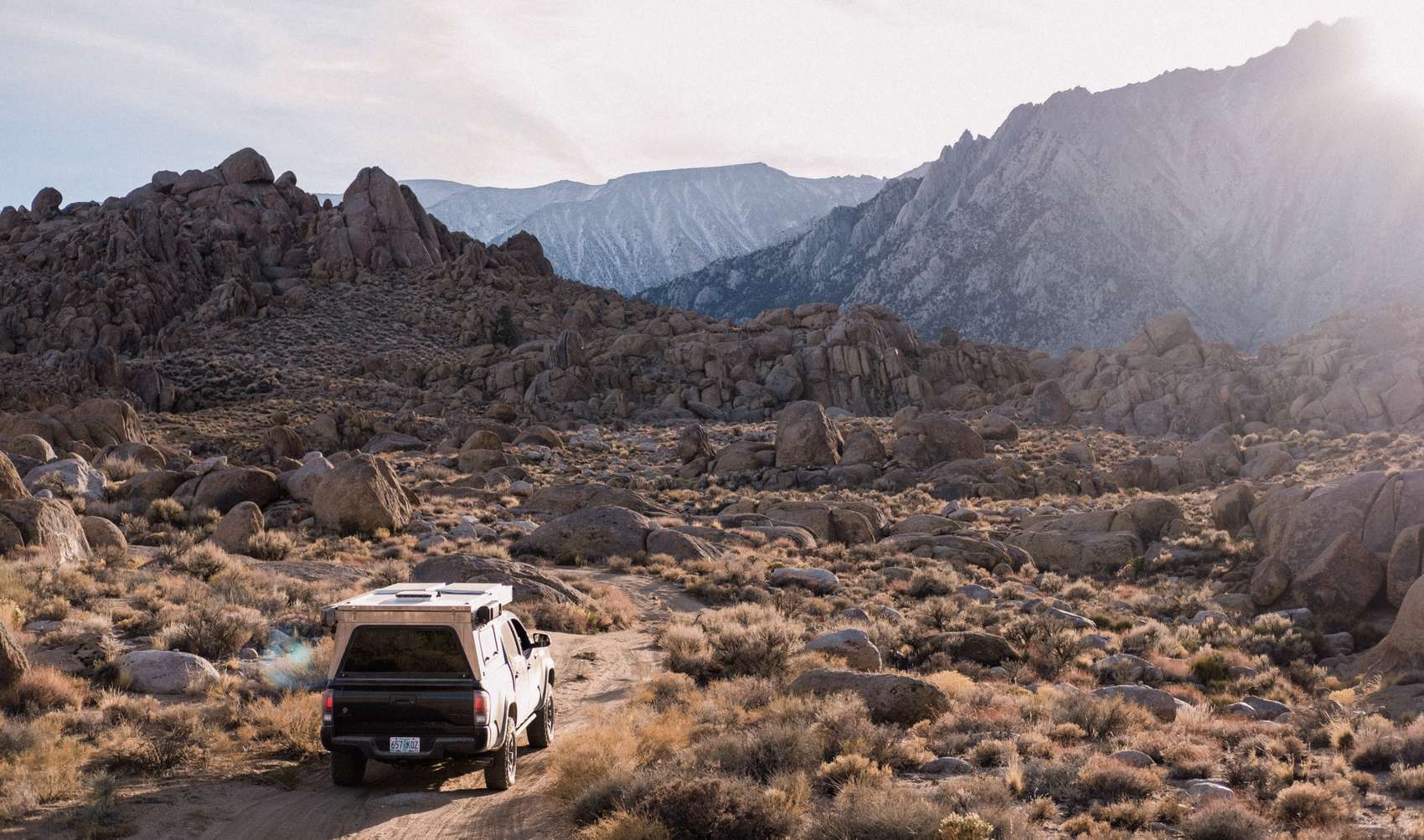 Lone Pine was amazing. There were restaurants, coffee, groceries, and lots of people, but just a few minutes out of town is the BLM's Alabama Hills. We were surprised by the massive amount of people camping in this area, but again used our strategy of driving up sketchy looking roads to get away from the crowds. Most folks appeared to be driving low clearance RVs or a rental car, so all we needed was a road with a few rocks and a couple dips to be by ourselves.

For the first time this trip, we got to camp early enough to setup a fire and take out the chairs. We had a couple bundles of wood that needed burning. Louisa did all the work while I walked around and took photos. I did make dinner though, so not totally lazy. We roasted some potatoes and brussels sprouts on the skottle, then chopped up some steak and mixed that in as well. The potatoes took forever to cook, but using our plates as a "lid" while cooking seemed to help. 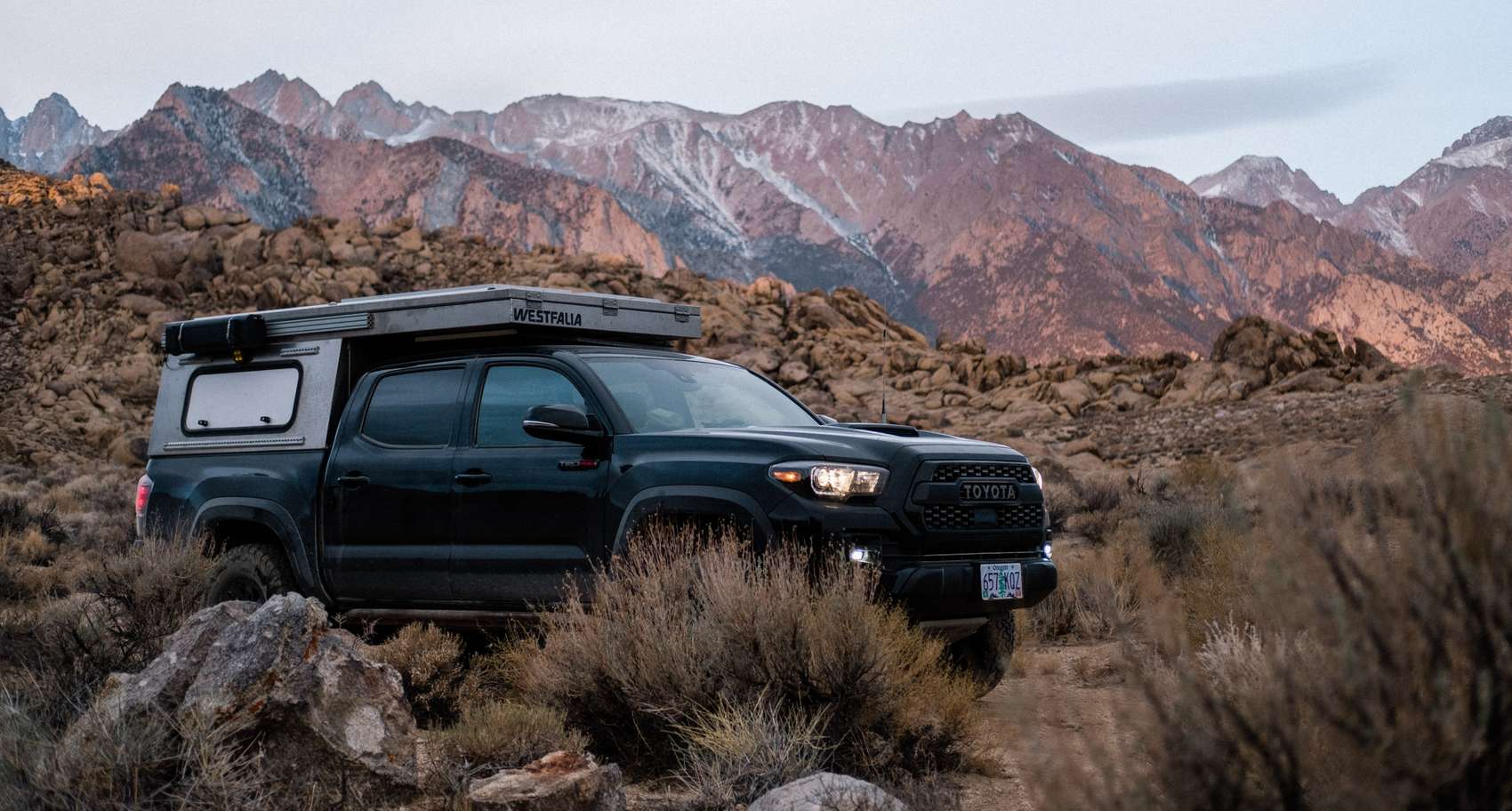 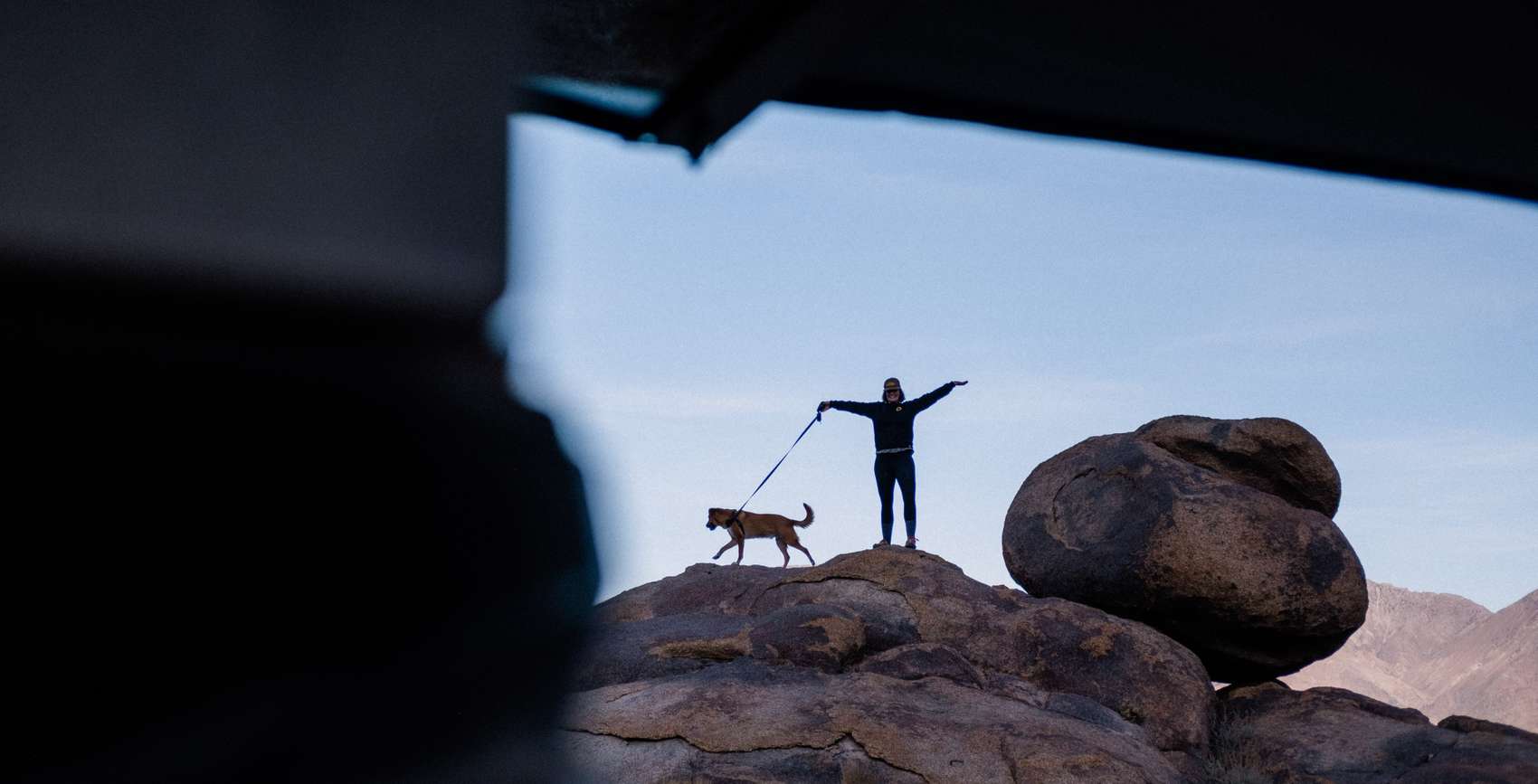 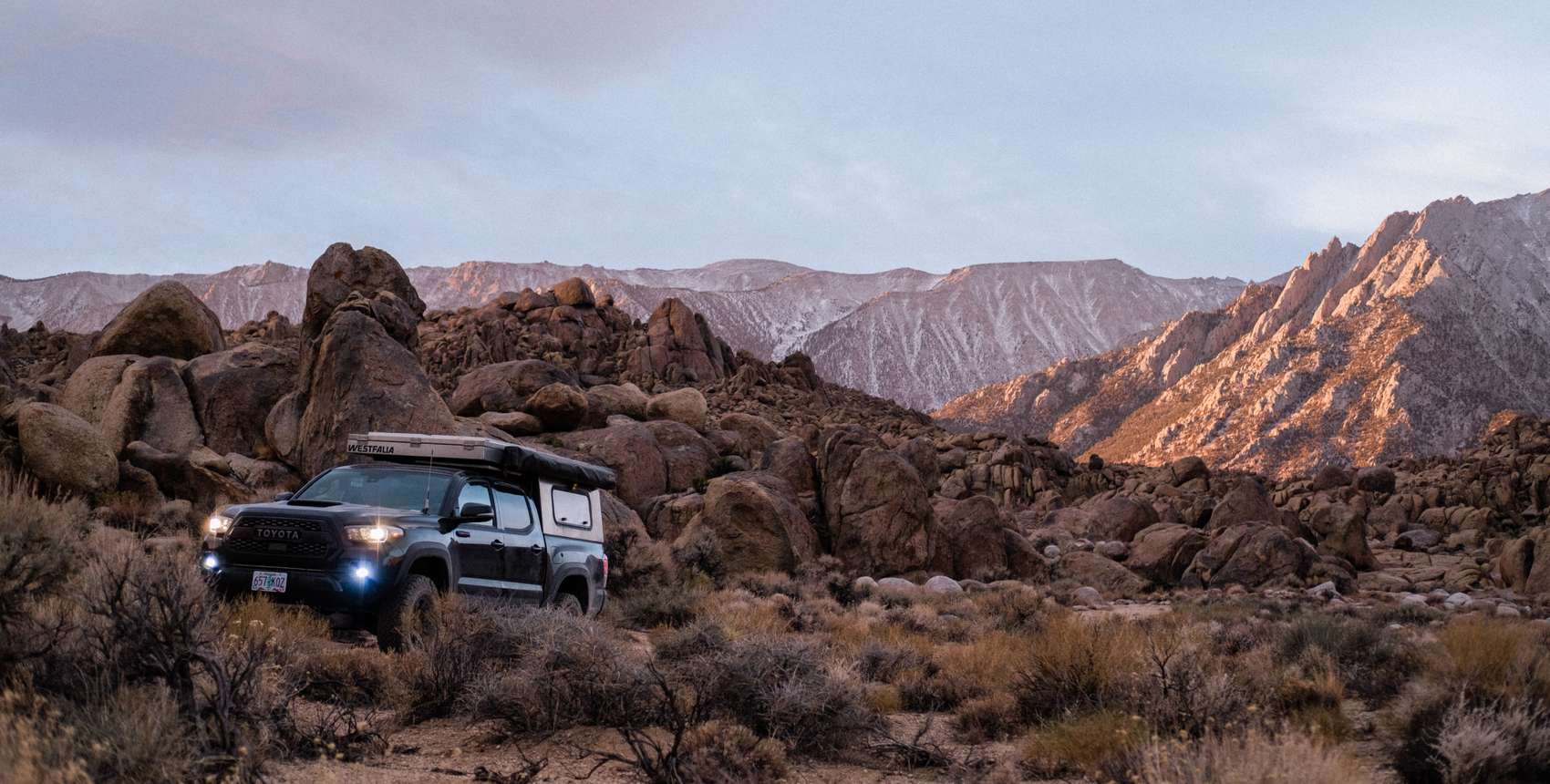 Because we had the camp fire, we stayed up a bit later (I think 8PM) and went to sleep without a movie. The next day was an earlier start at 5:30AM, then the long/boring drive back to San Francisco on the highway. 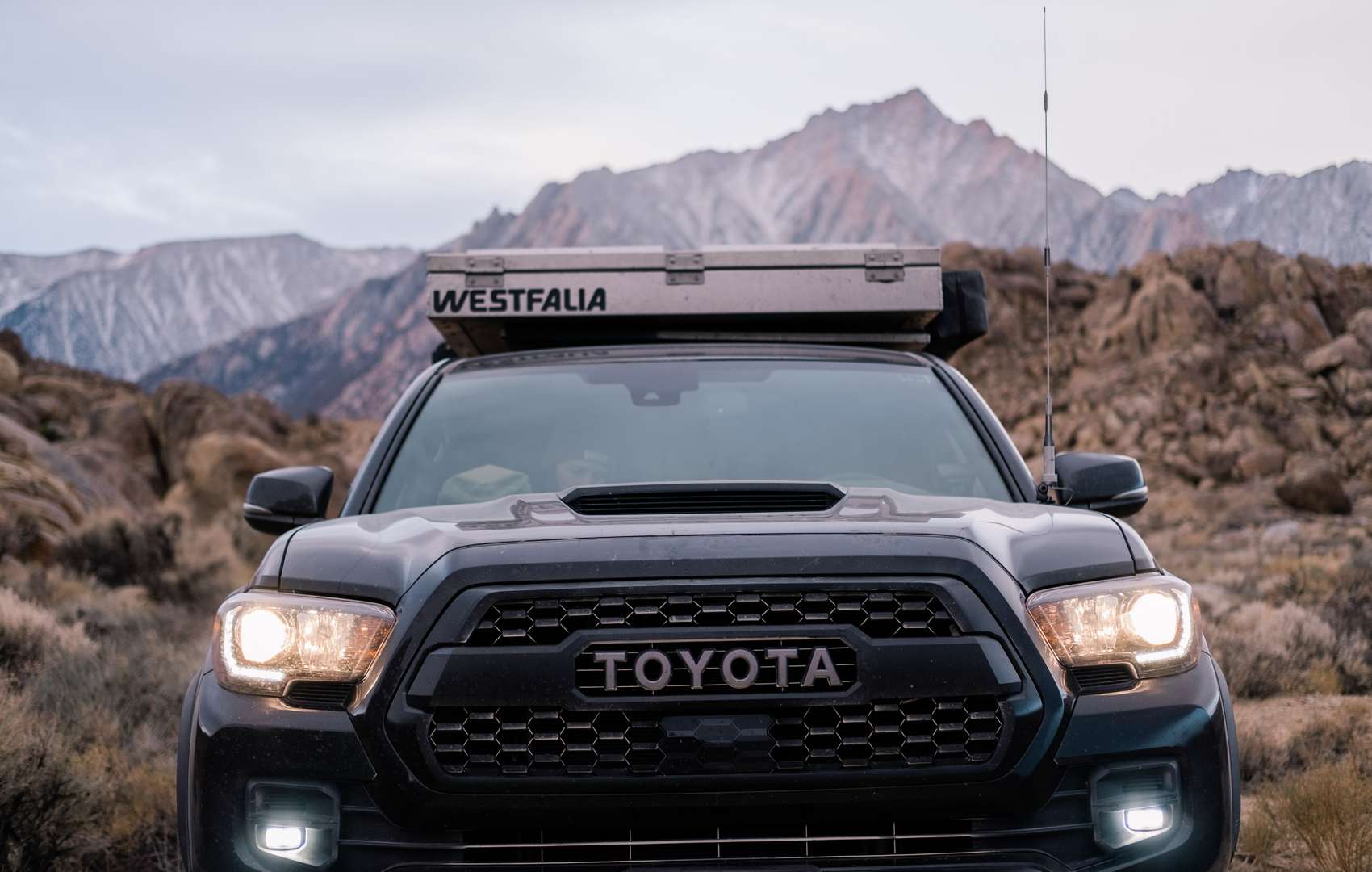 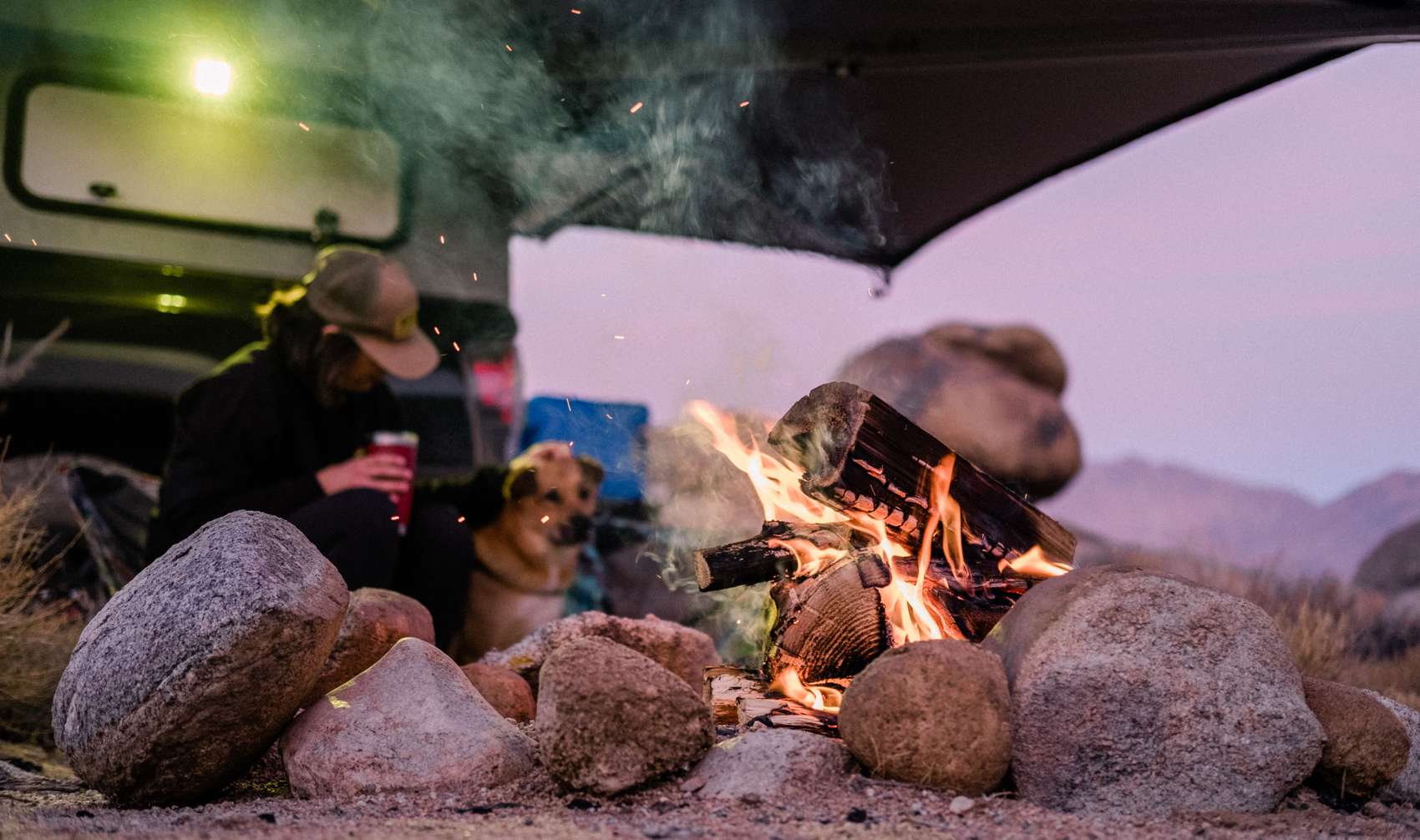 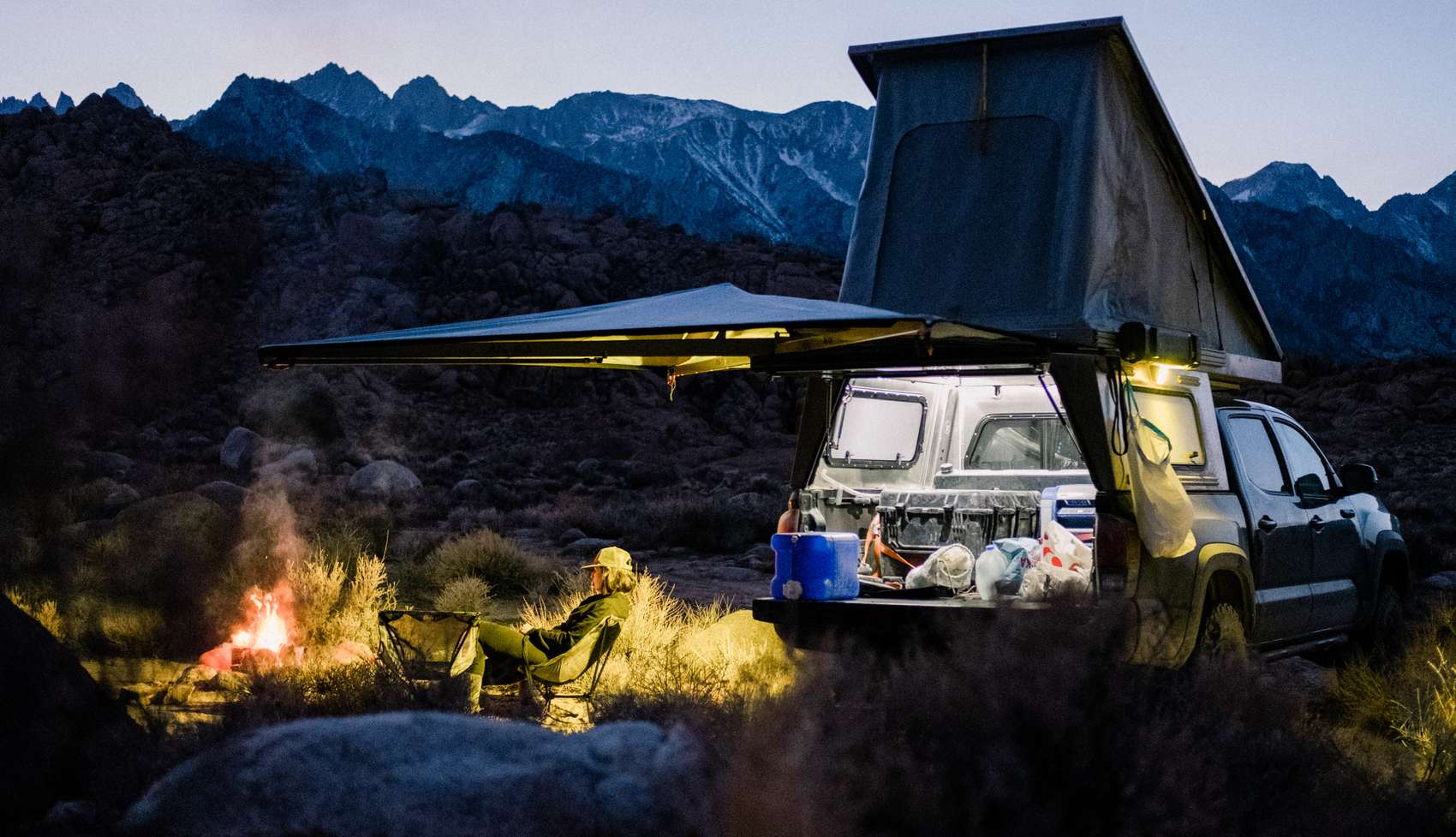 What to do next time?

Each trip we write down some of the things that could have gone better (usually just stuff we want to bolt onto the truck). We got home with this list: 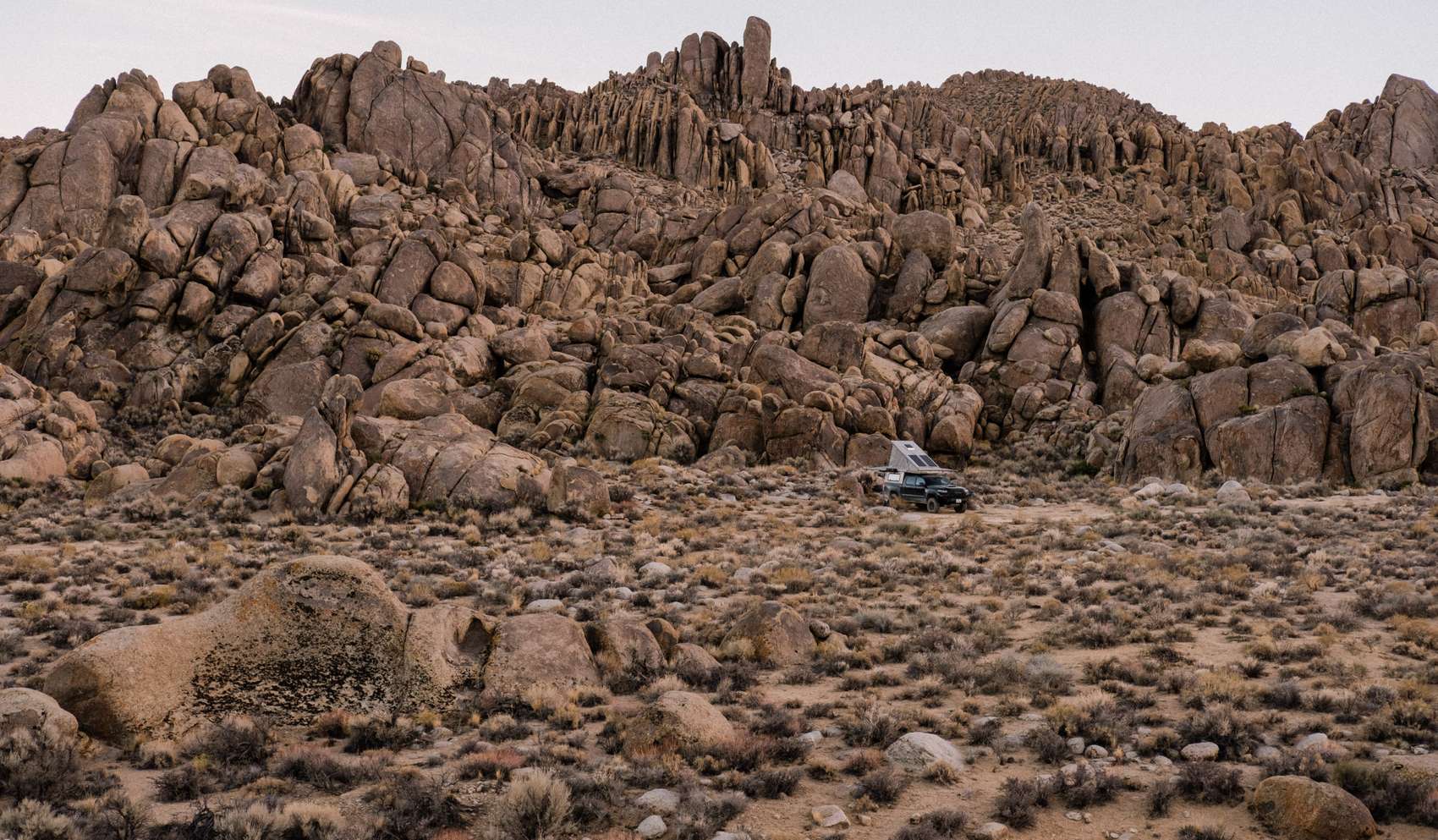