So I decided to sell my digital gear again and I'm back on film. Call me a hipster, but it's more fun and taking photos is basically the only reason I go out to pretty places on the truck and bike (also, I'm a hipster). This means spending less time in front of a computer editing photos. Shoot photos, mail film to the lab, download photos. Done! 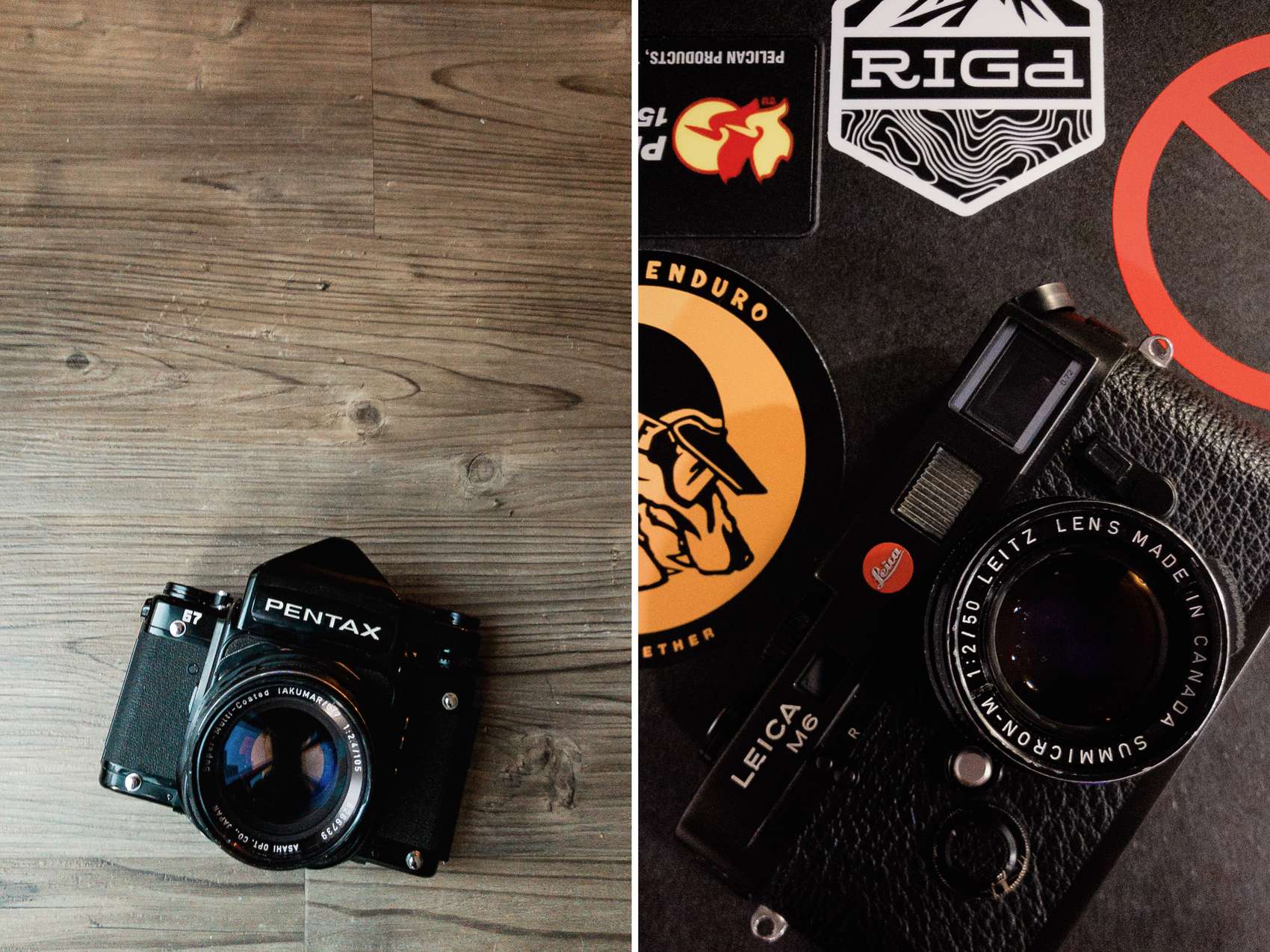 The Fuji X-T20 has been replaced with the 6-pound Pentax 67 and the featherweight Leica M6 TTL. These cameras are about the same age (~25 years) and they look similar because they both have round glass things attached to them, but they are very different and perfect examples of why film cameras are so fun. For this trip, I brought the Pentax with Ektar 100 film. 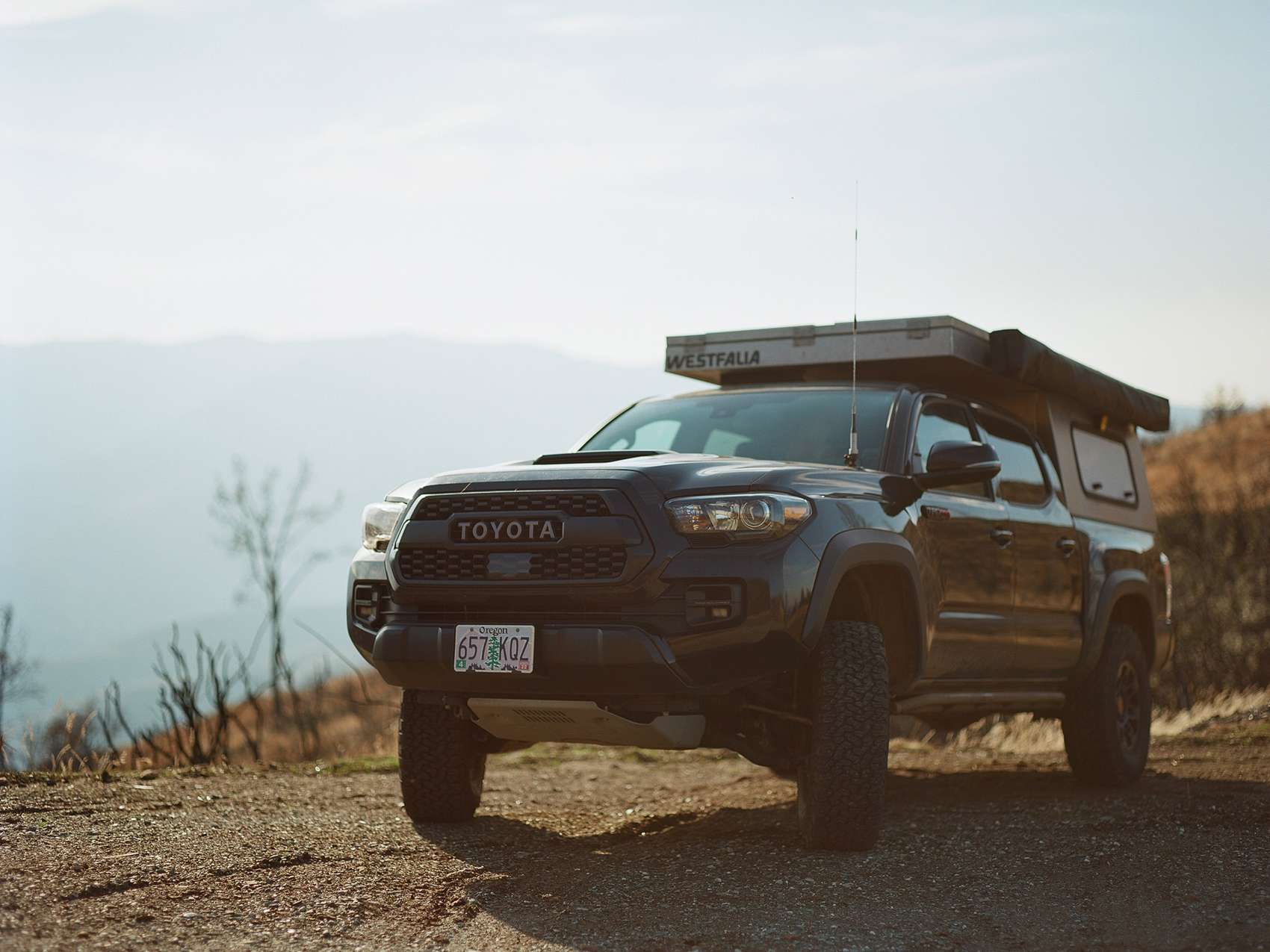 No plan but coffee

Baxter and I were solo this weekend and didn't have a game plan. The first, second, and third stop was coffee. We headed straight East from San Francisco towards Yosemite. The highway was closed due to "weather", so we knew we weren't actually going to make it all the way to the park. 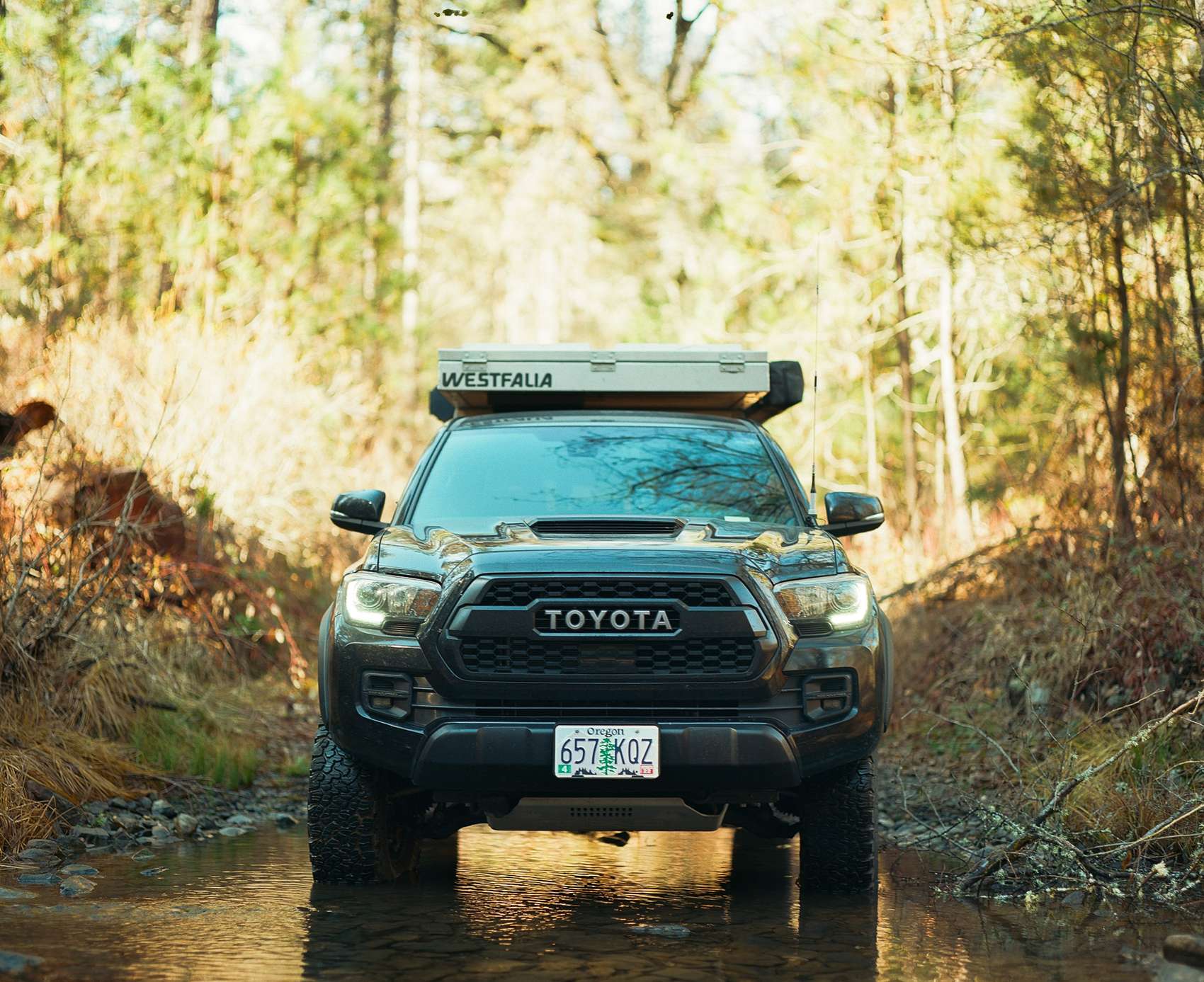 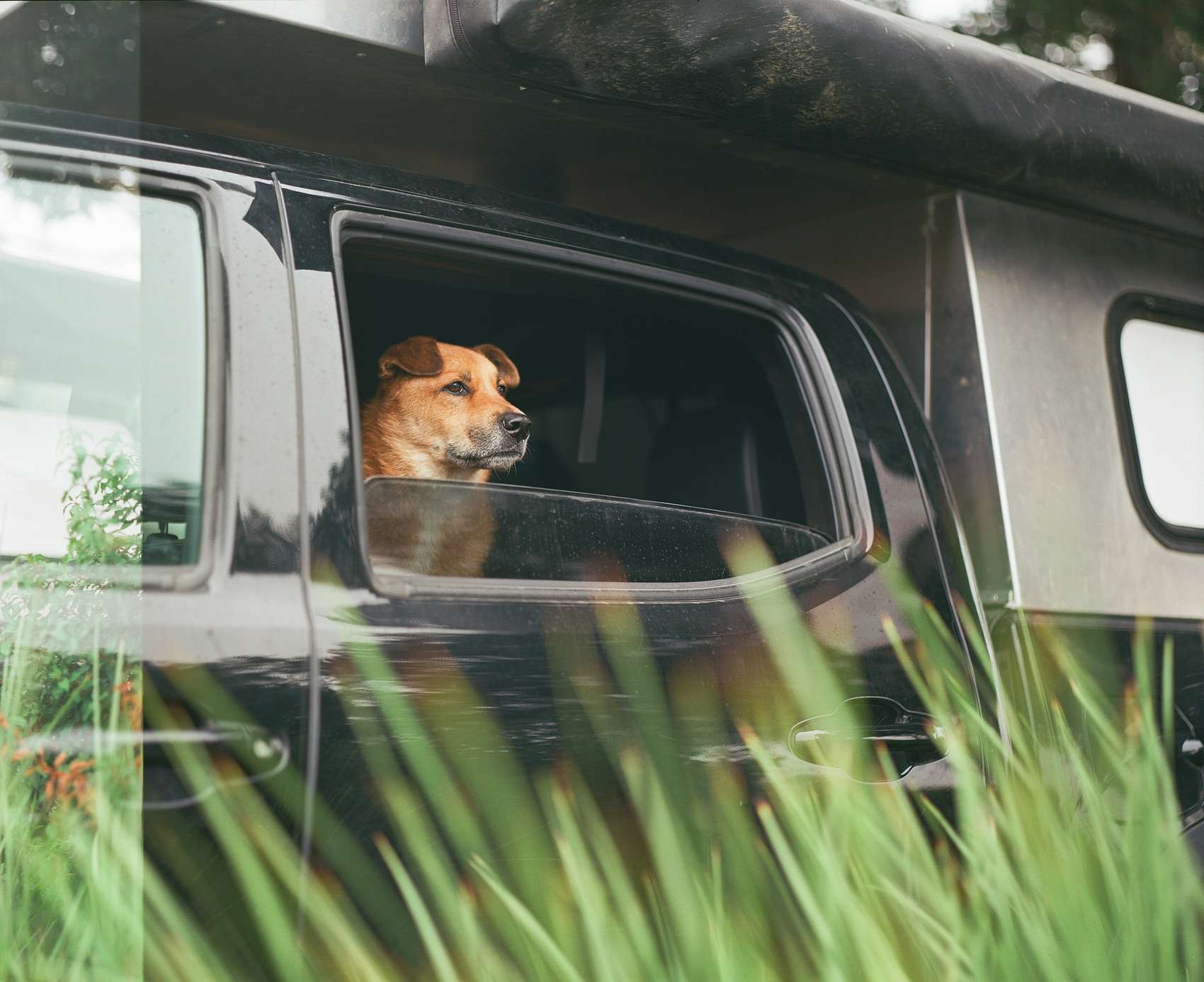 Our strategy for trips like this is to open Gaia GPS, enable the public land overlay, and drive towards big chunks of BLM or state land. This usually means heading in the direction of Nevada or Oregon to find the good stuff. We start caching maps on the way because T-Mobile won't exist where we're going. 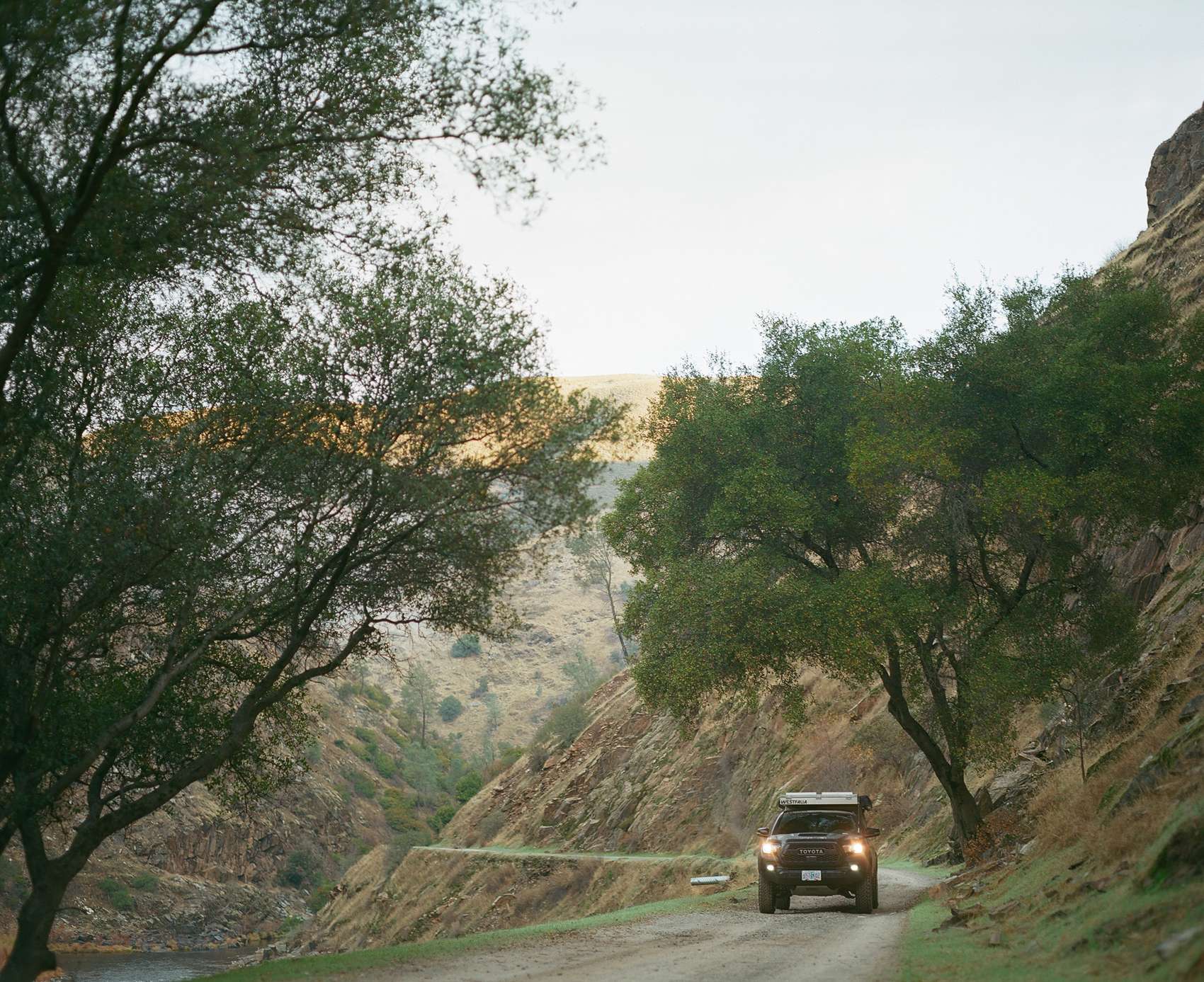 We got to the spot the highway closed and started to head South towards the BLM land. We found ourselves on a large gravel road that kept crossing a shallow river. Criss-crossing this road was a bunch of private (closed) roads, which was a bummer. There weren't many options for exploration at this point, but we were heading in the right direction.

We continued South for another 15 miles or so on this gravel/mud road and eventually ended up at somebody's house, a dead end. We turned around and started heading back towards the highway almost immediately because they had some huge dogs that did not want us there. I also imagine this place doesn't get many visitors and whoever lived here was probably grabbing their gun and/or bat. 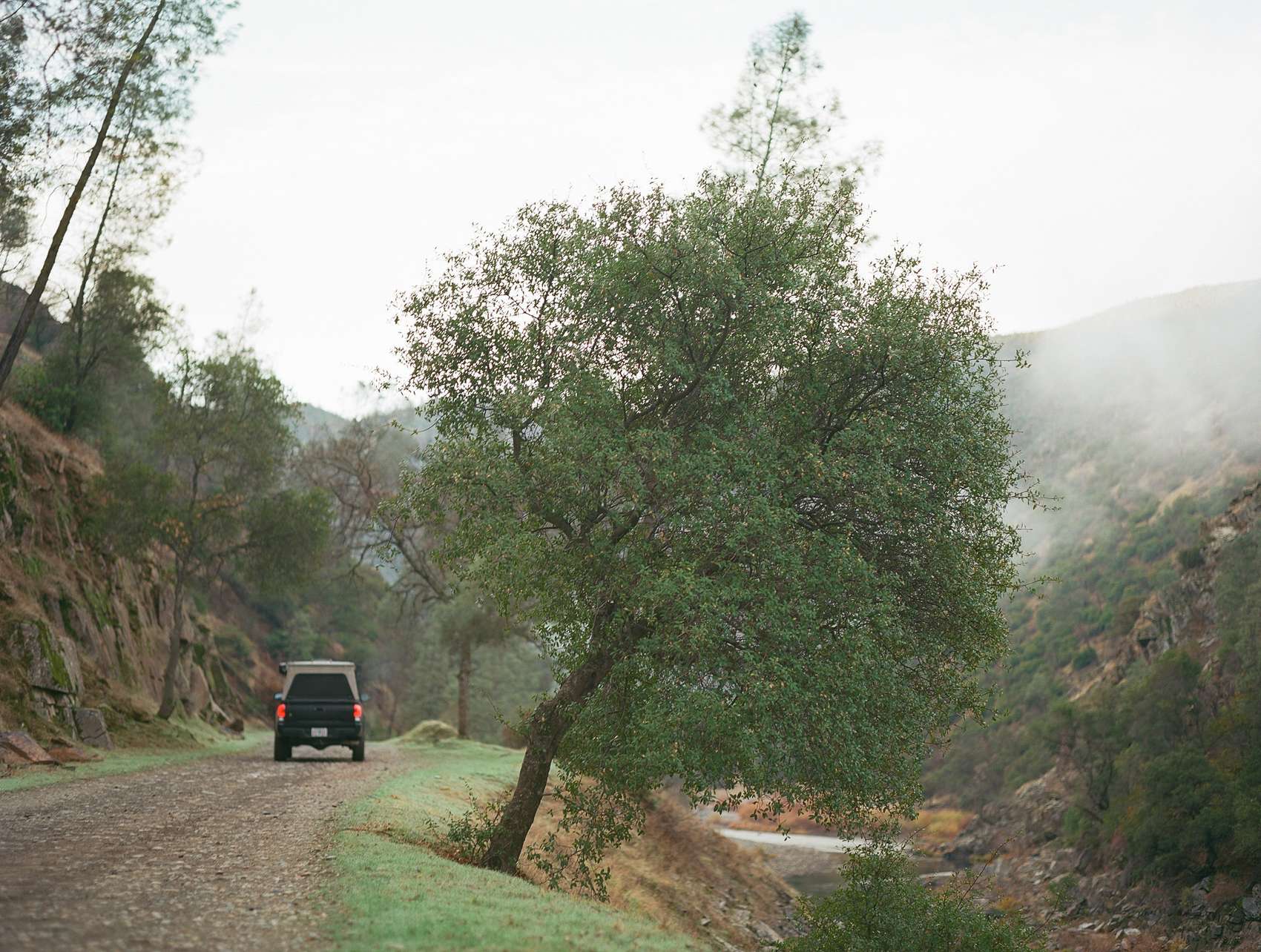 So obviously we weren't going to just go back to the highway because that would be lame. Instead we took the drive back North nice and slow and kept our eyes open for other options. Most of the roads were private, but we found a public fire road that looked to be heading Southwest-ish and decided to give it a shot. 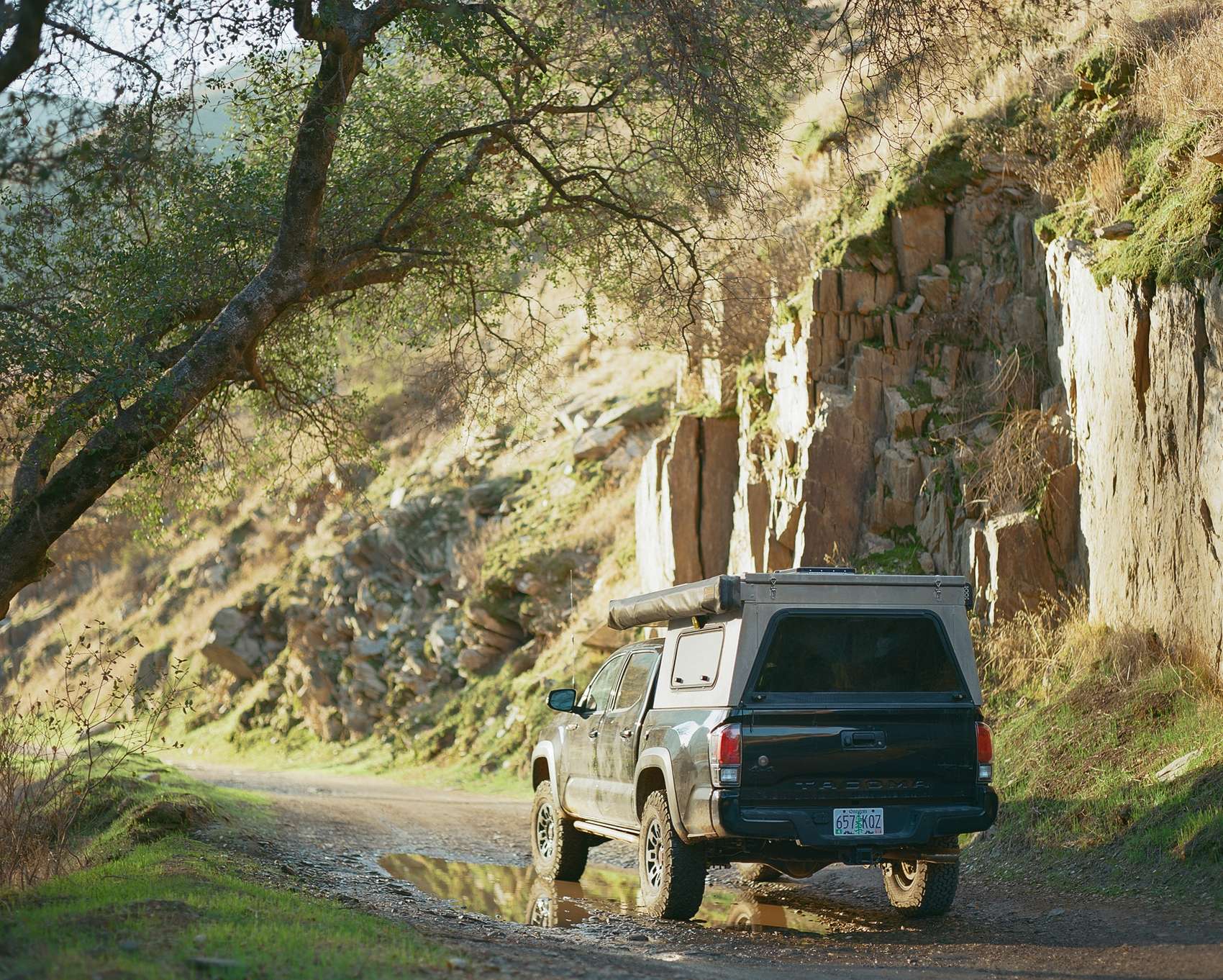 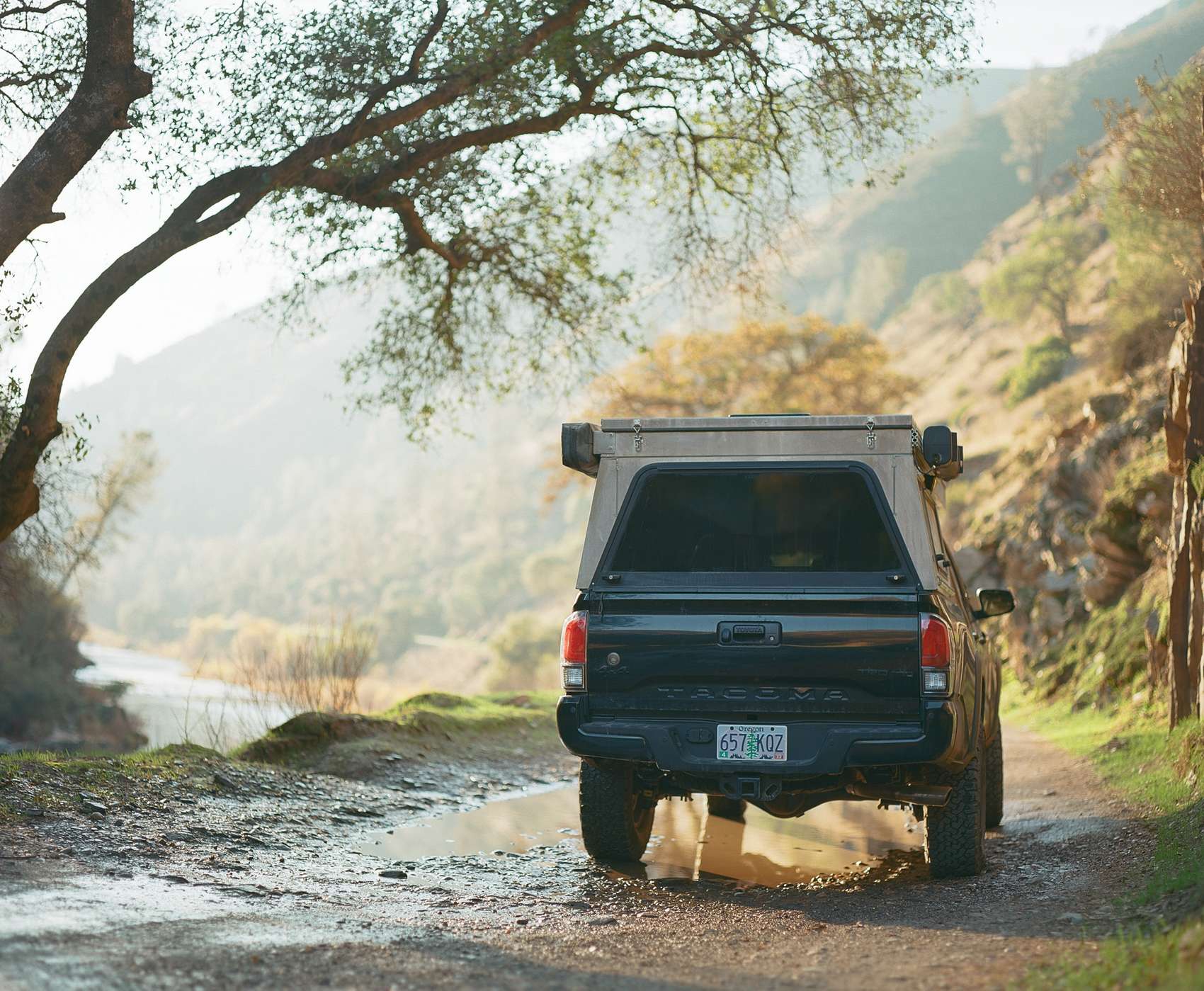 We continued for another 30 miles down this gravel road and were rewarded with the holy/mighty/wonderful thing known as public land. The reason we look for this stuff is because it makes camping easy. BLM and state land often has hundreds of places to camp for free and many of them are 'dispersed', meaning they don't have facilities, ugly signs/fences, or (most of the time) other people. 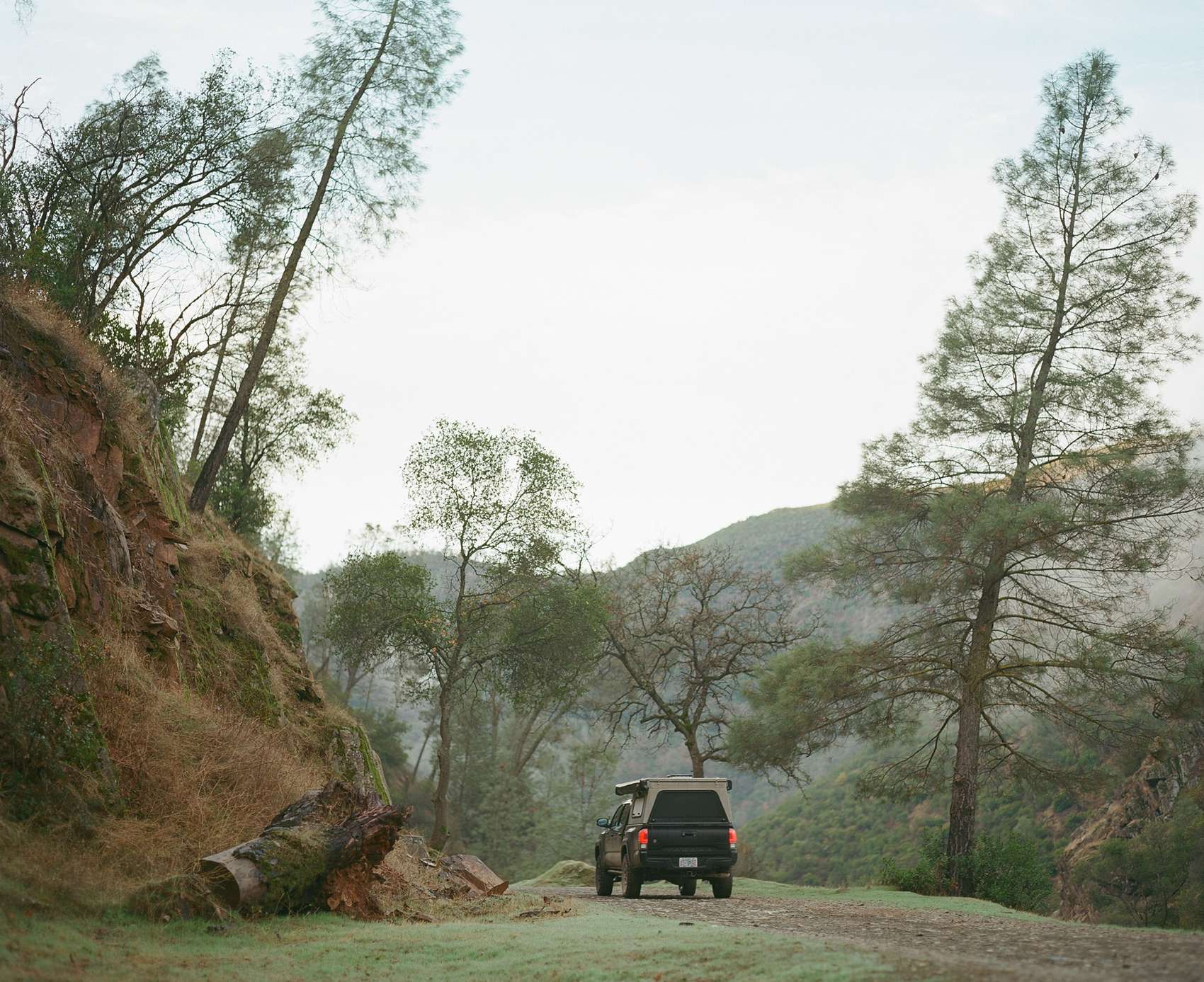 Parking in the road

With around four hours left of daylight, there wasn't any rush to find camp, so we putted around a bit to get familiar with the area and grab some photos. We dropped waypoints on some decent camping spots so we had a backup plan in case this road led nowhere interesting. 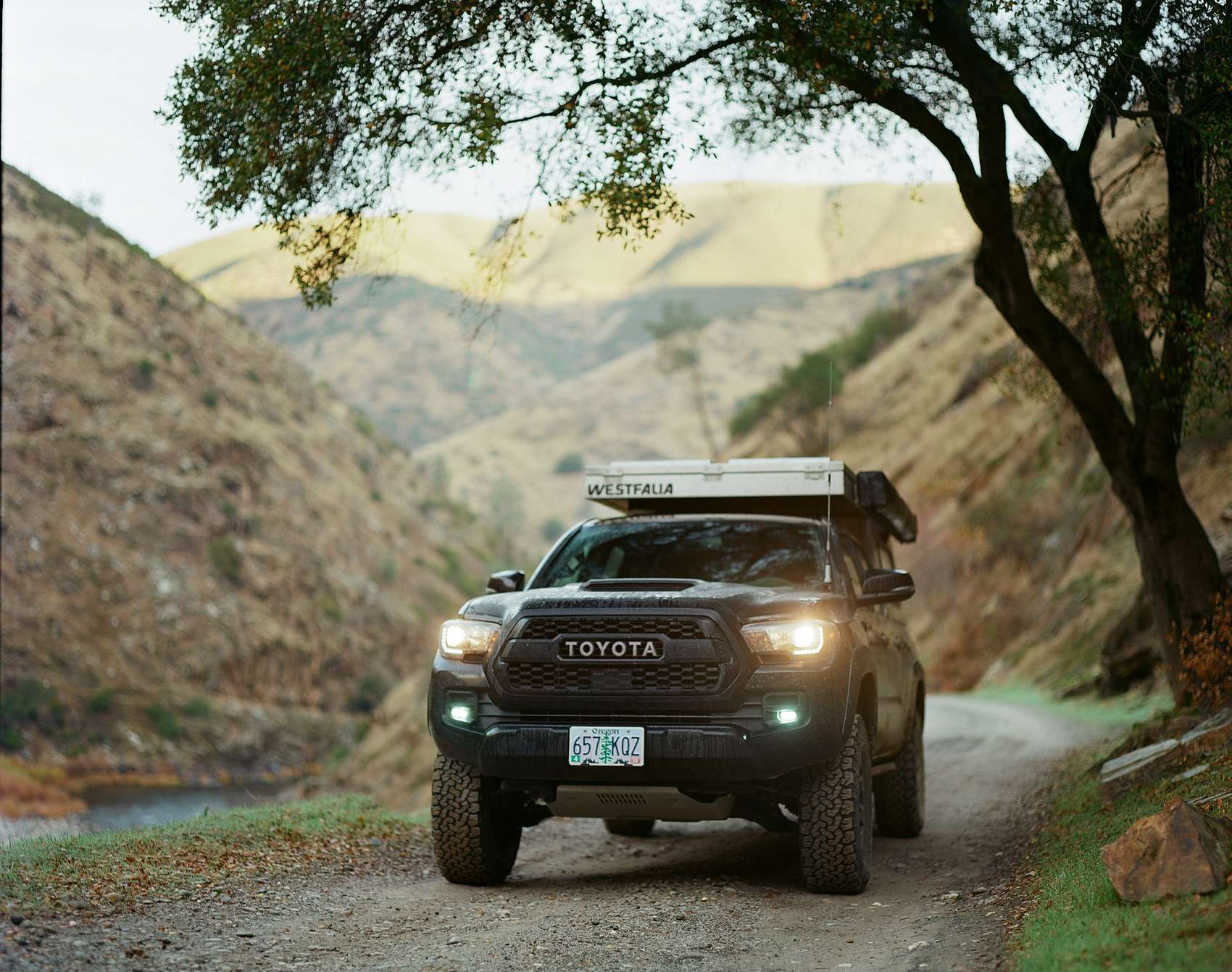 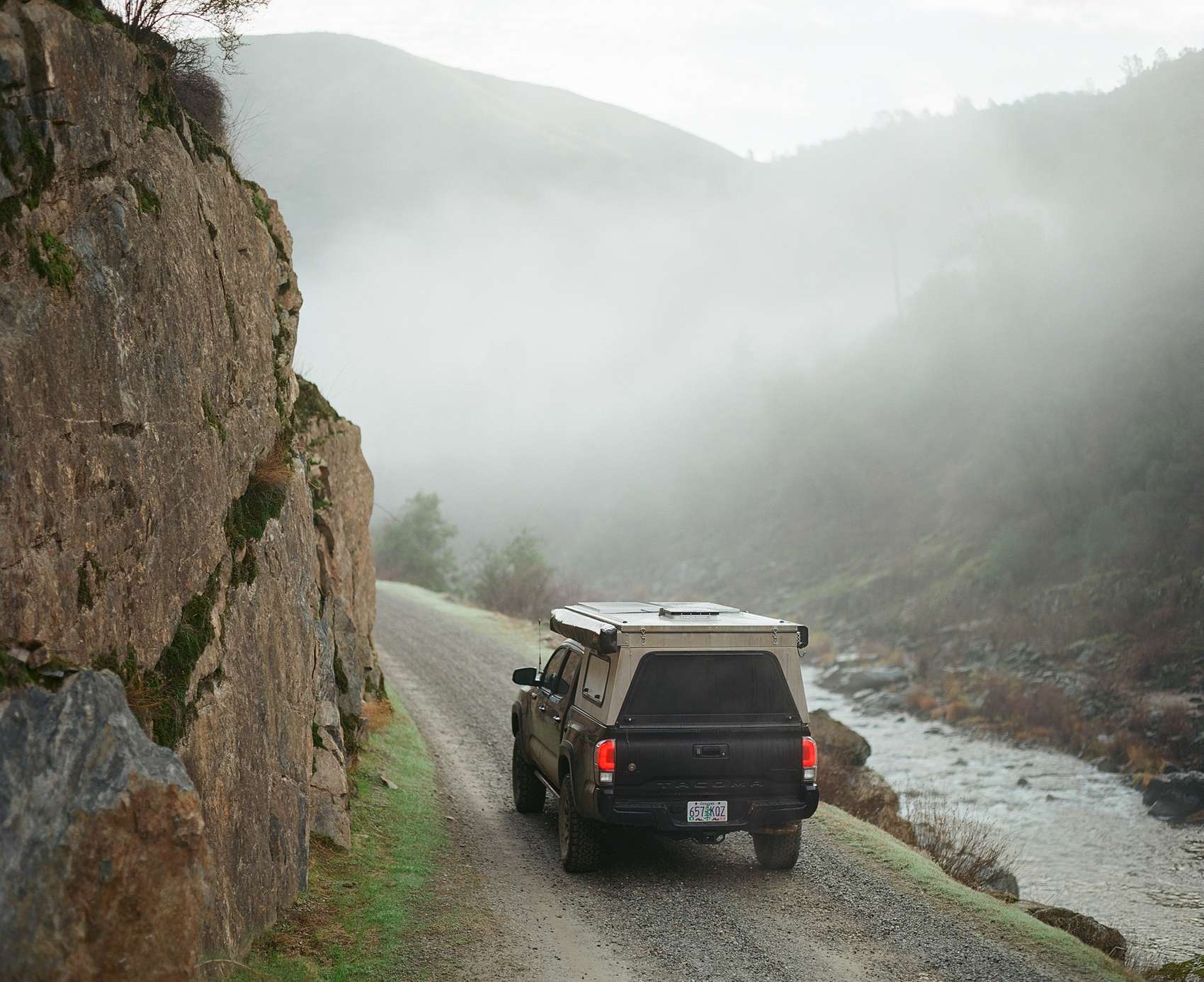 We followed the Merced River, just outside Yosemite park. I could see on the map that the road would eventually end, which usually means we'd find a nice campsite or two. This isn't always the case, but people sure do love setting up camp at the top of hills or the end of roads. 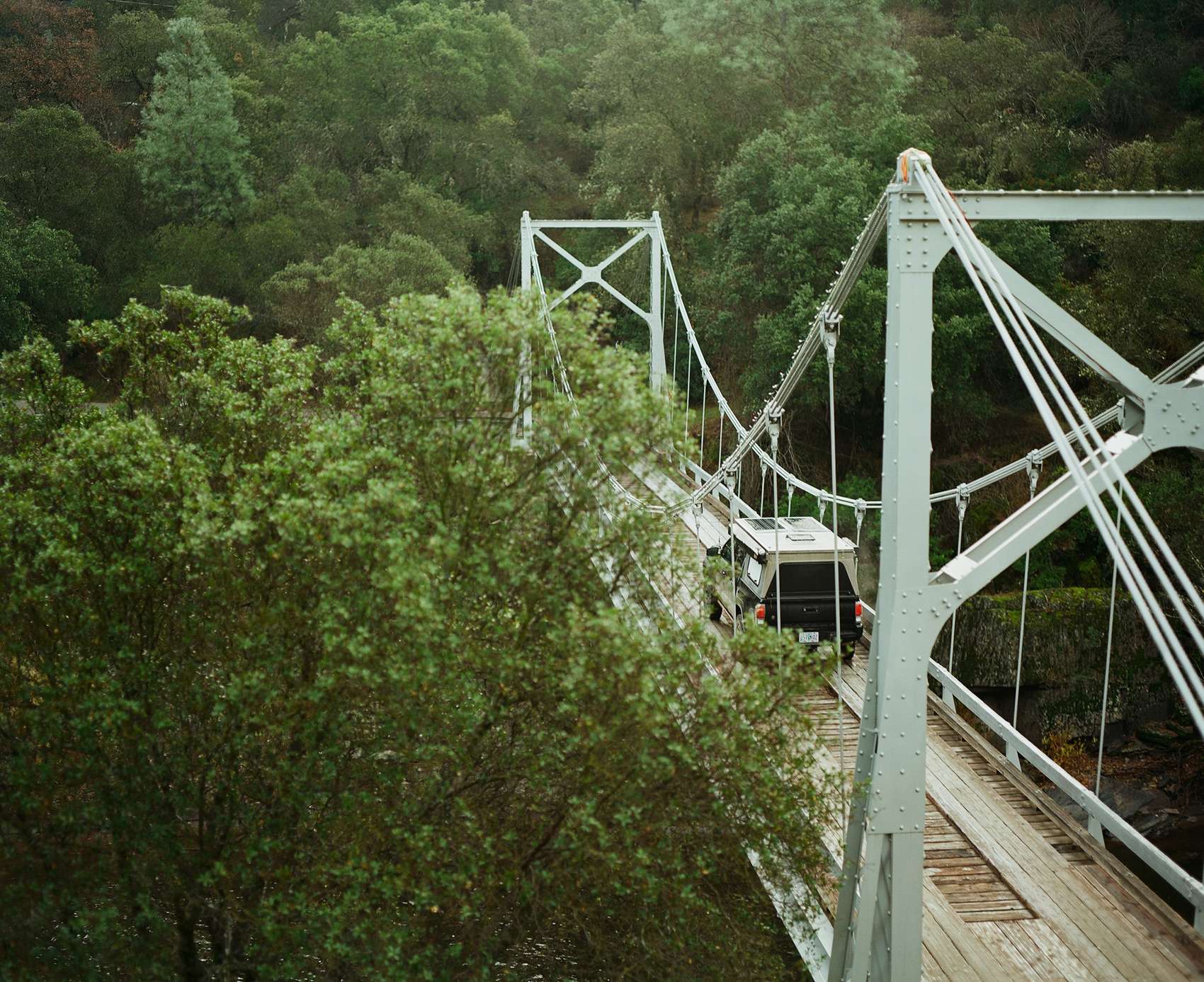 Just as we started to get bored, there was an opportunity to change things up and cross to the other side of the river. This bridge was slippery and I almost fell down a bunch of times while walking around trying to take photos. 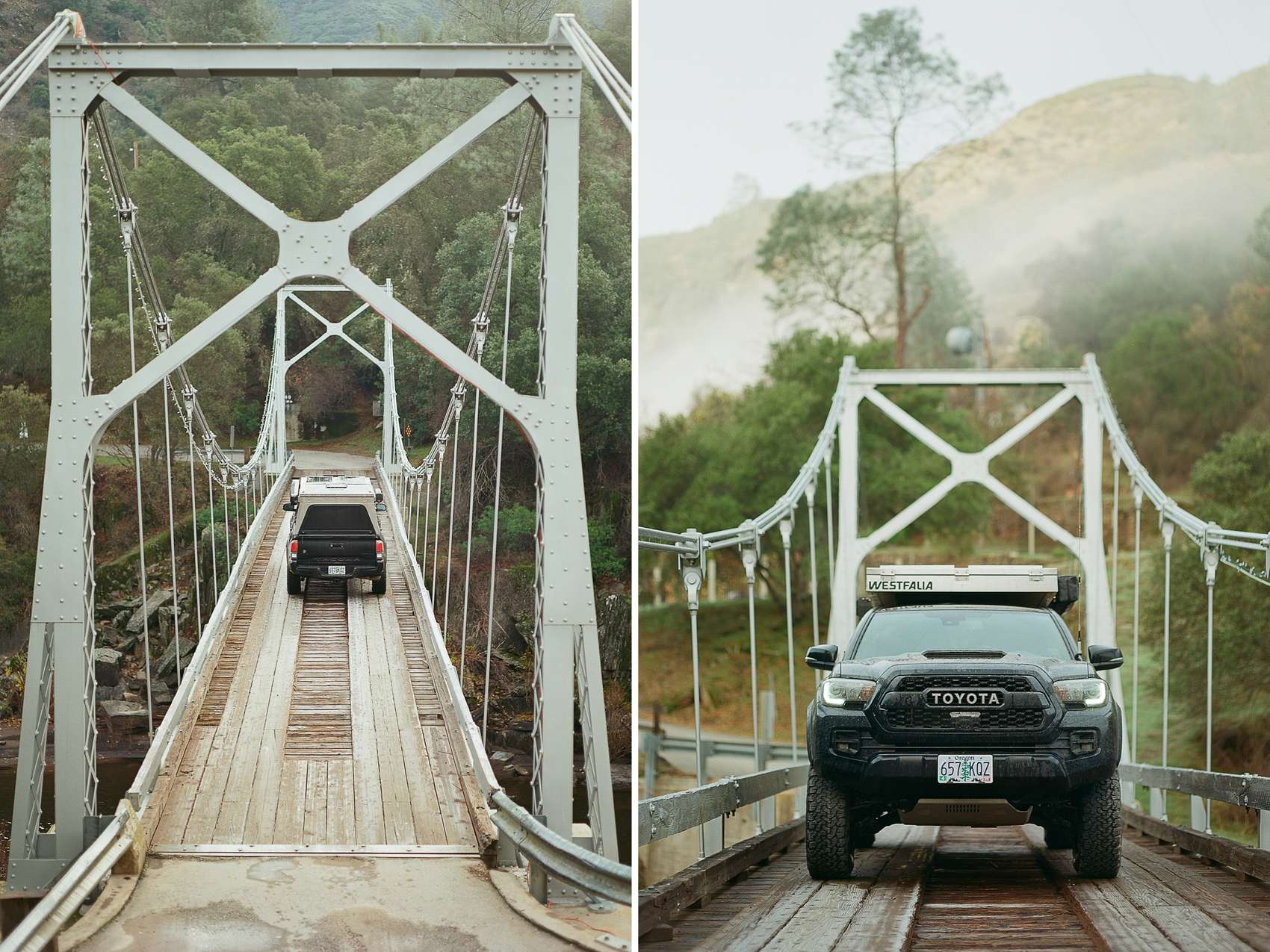 Baxter usually barks when I leave him in the truck and start running away with a camera in my hand, but he was totally chill by this point and just enjoying the ride. It's funny to see him calibrate every weekend and transition from "city dog" to "adventure dog". He needs these trips as much as I do I think. 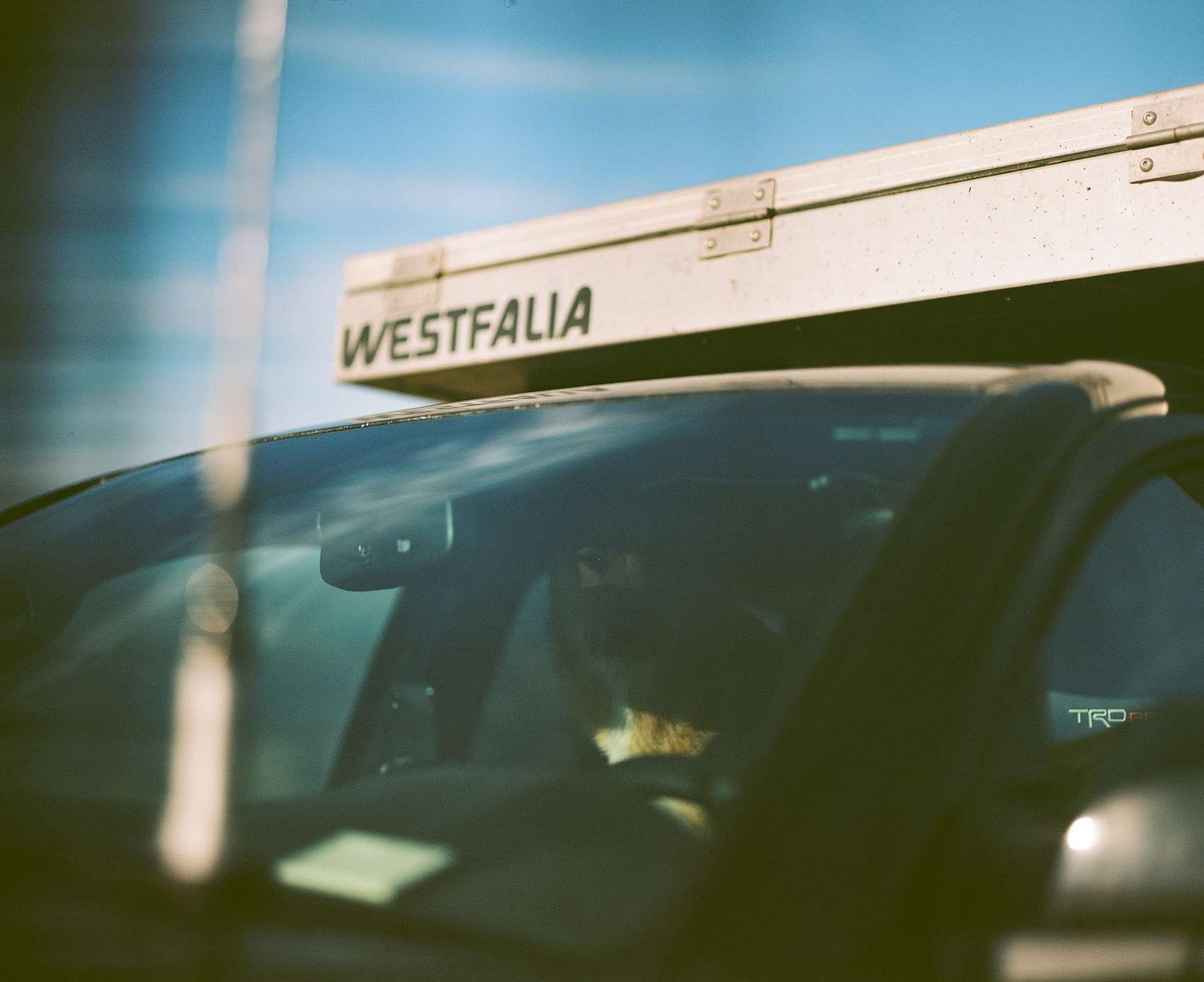 As expected, we started passing a few different places to setup camp as the road started to end. Most of them weren't that great, so we kept moving. One of them was basically a grass parking lot with a fire pit in the middle and the other was a hike and didn't have good vehicle access. 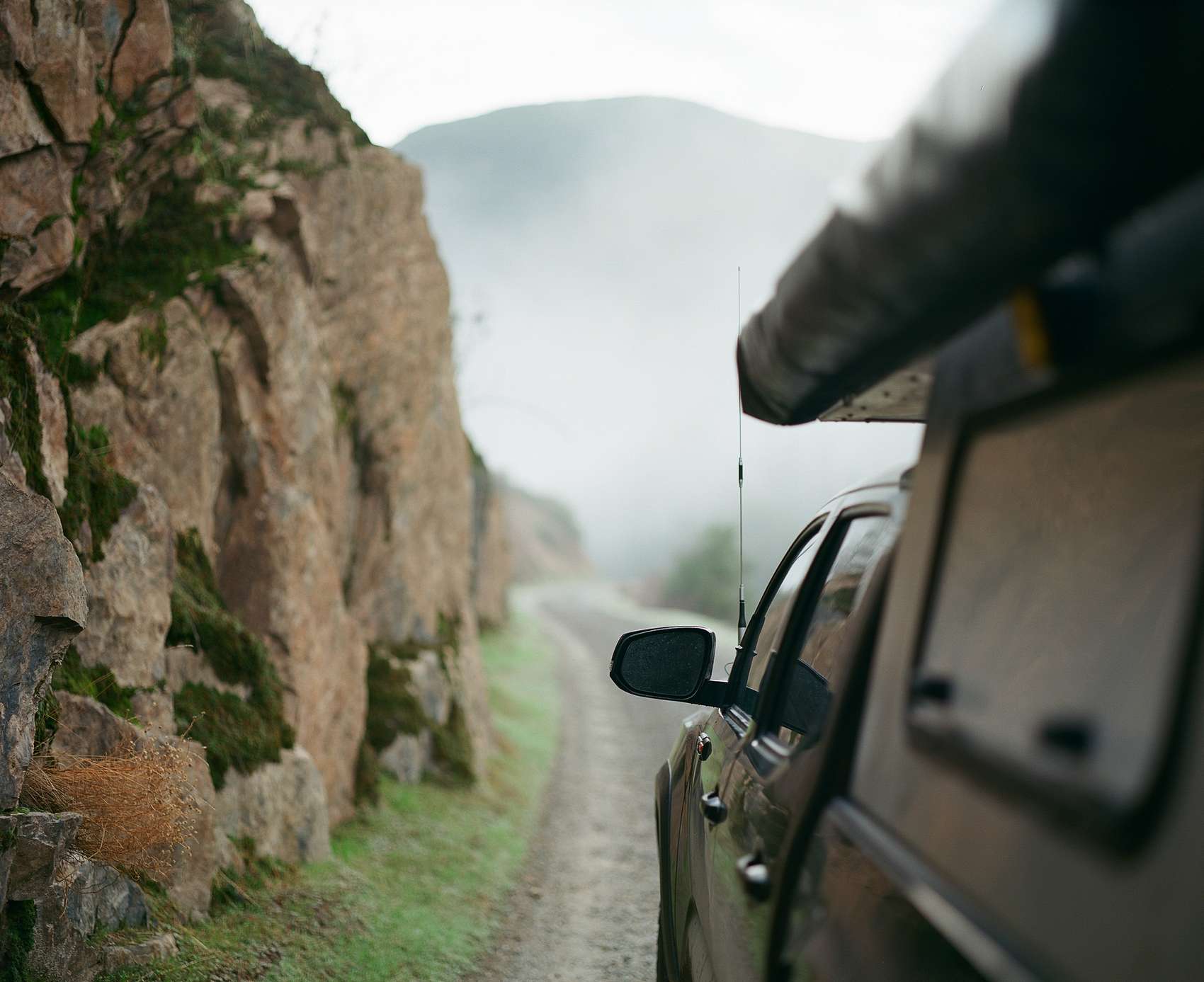 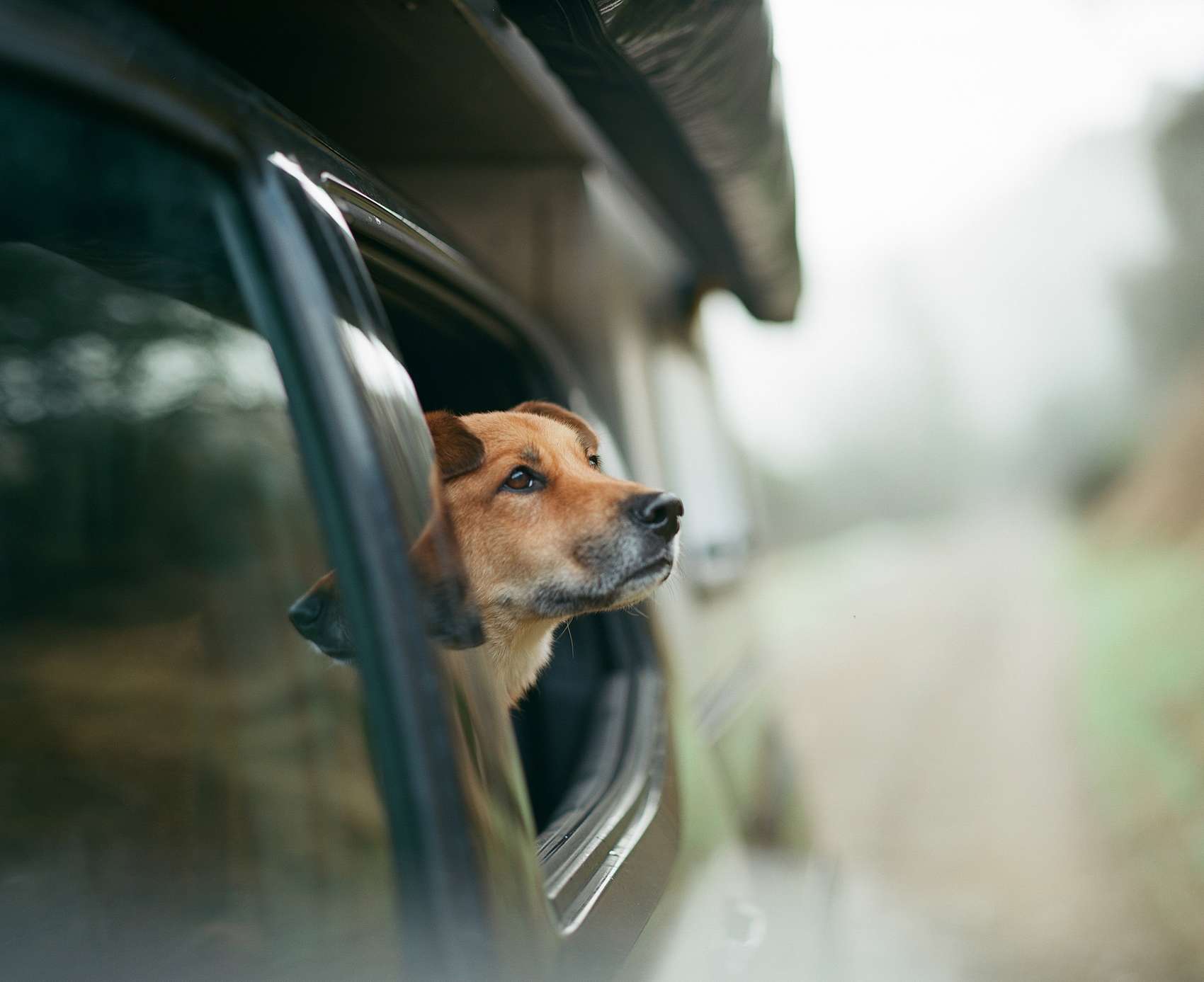 We followed the road to the end and found a decent spot to spend the night, but it was more developed than I like. It was an almost perfectly leveled platform with a little wood border. Large rocks were placed to strategically guide vehicles away from the beach. It had a metal fire pit, a tree, and a bear box. We did not put our food in the bear box, but also did not die from a bear attack. 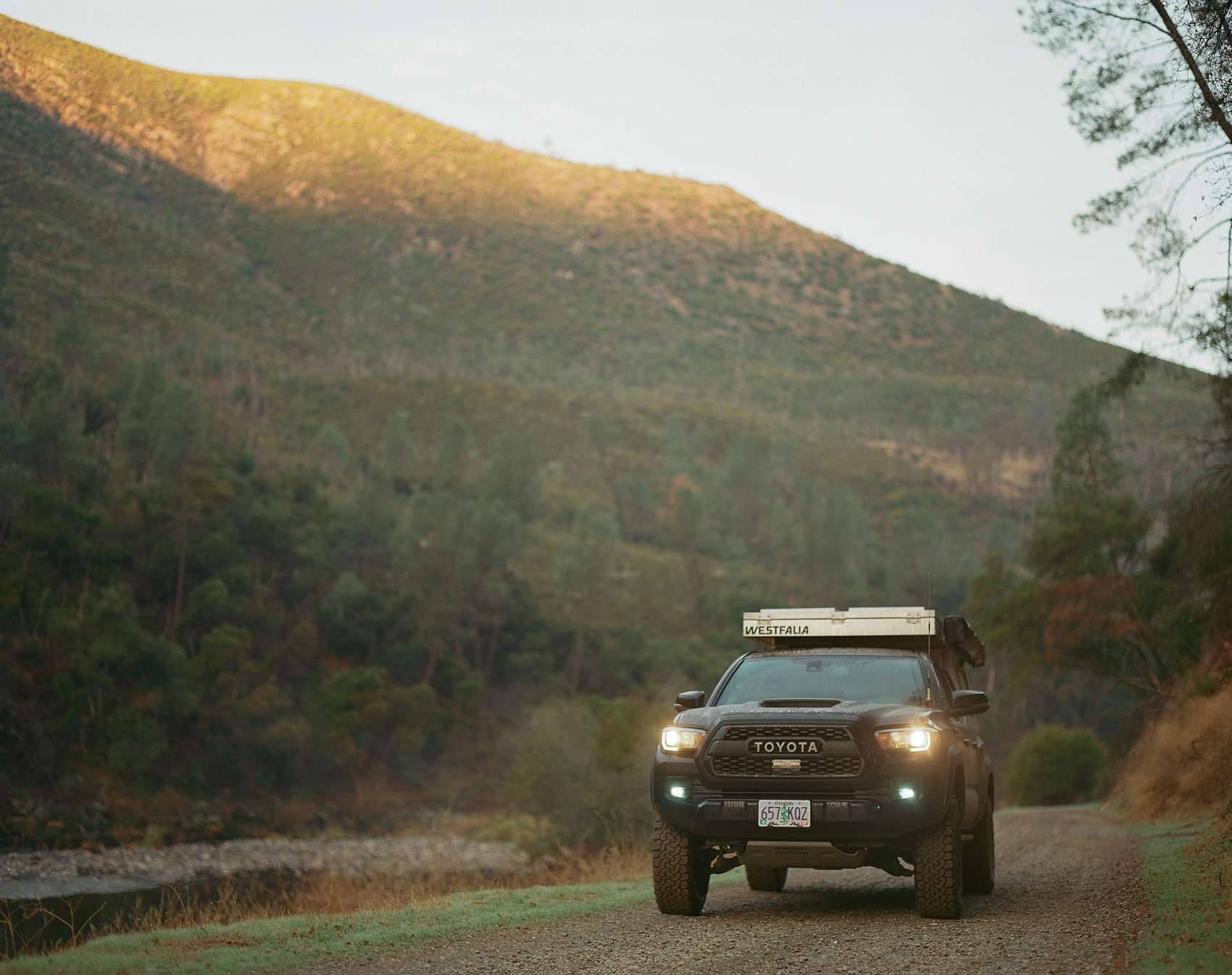 I think this was the sixth night in the Vagabond Outdoors camper and the first with only me and Baxter. He struggled last time getting in/out of the bed because he's not used to being picked up and lifted 5 feet into the air. He's getting better though and I had to spend a lot less time trying to convince him that it was a good idea. 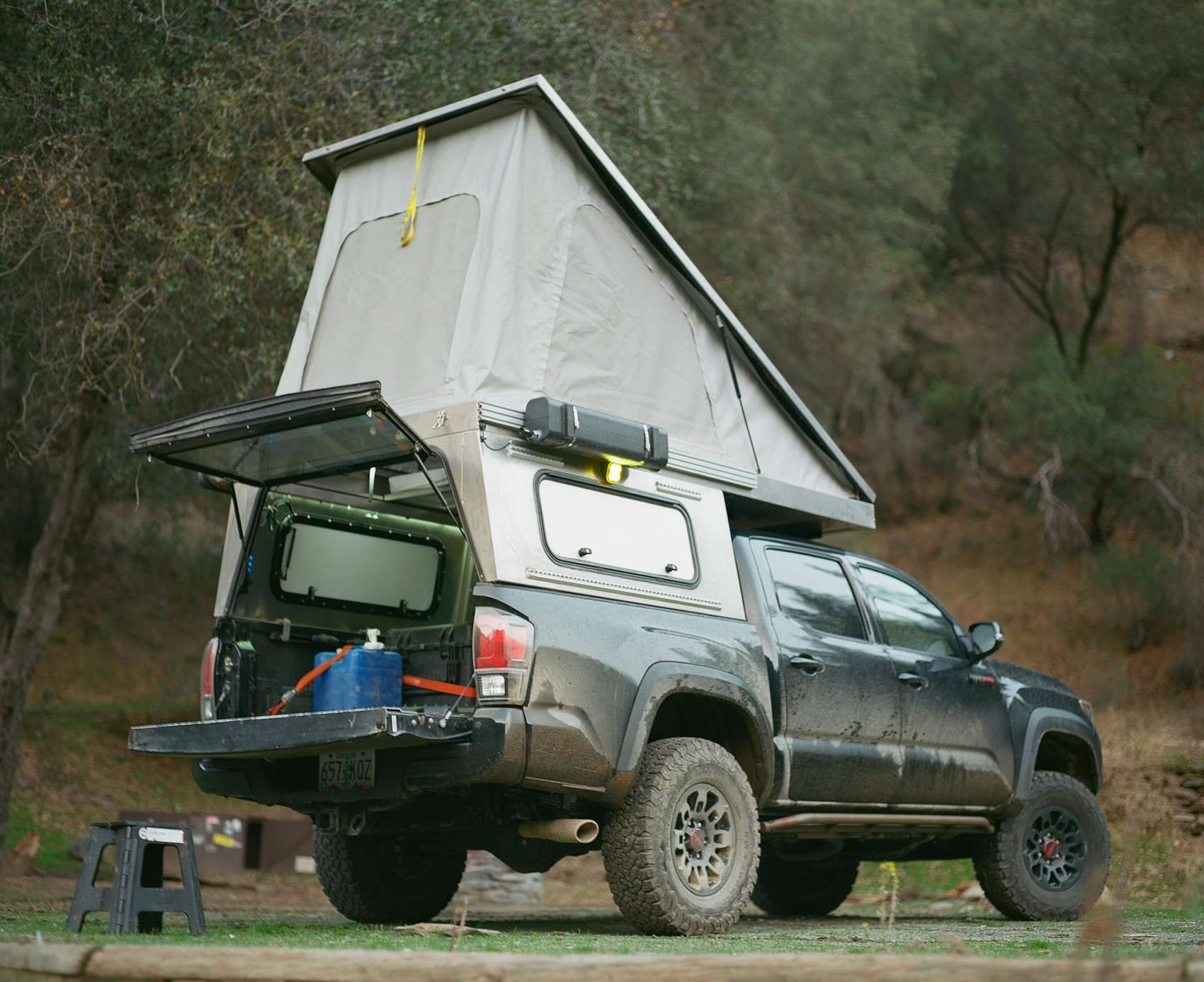 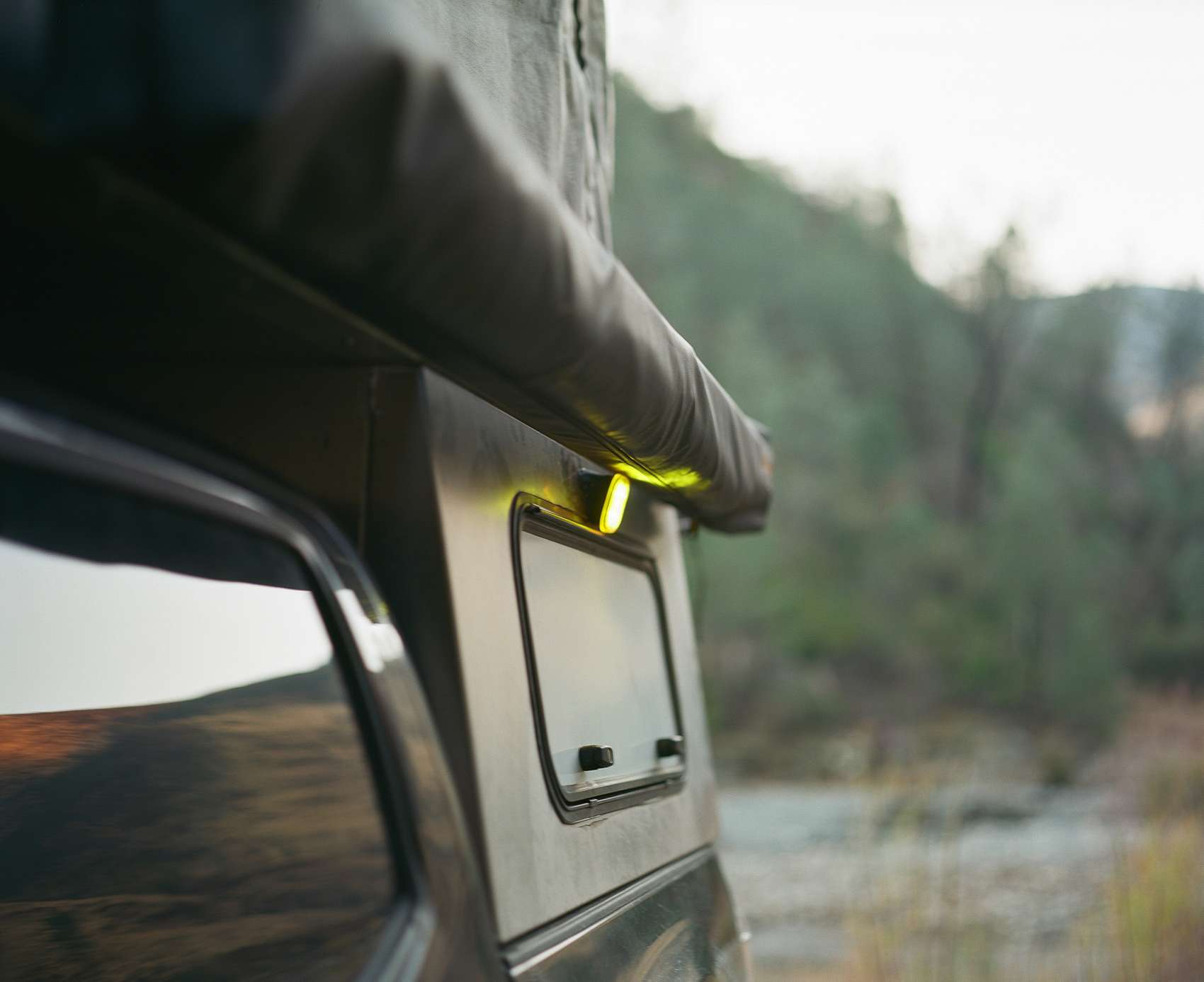 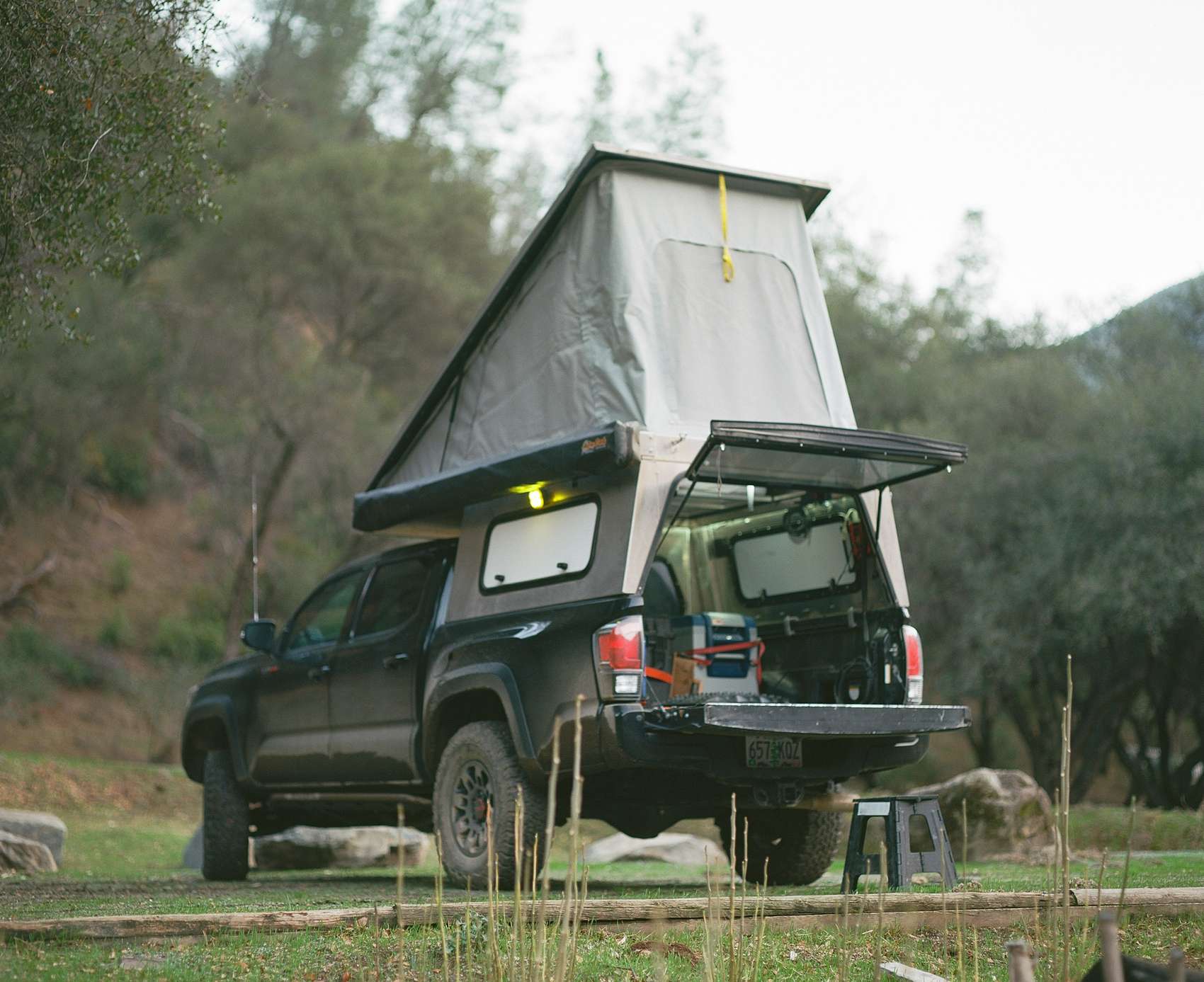 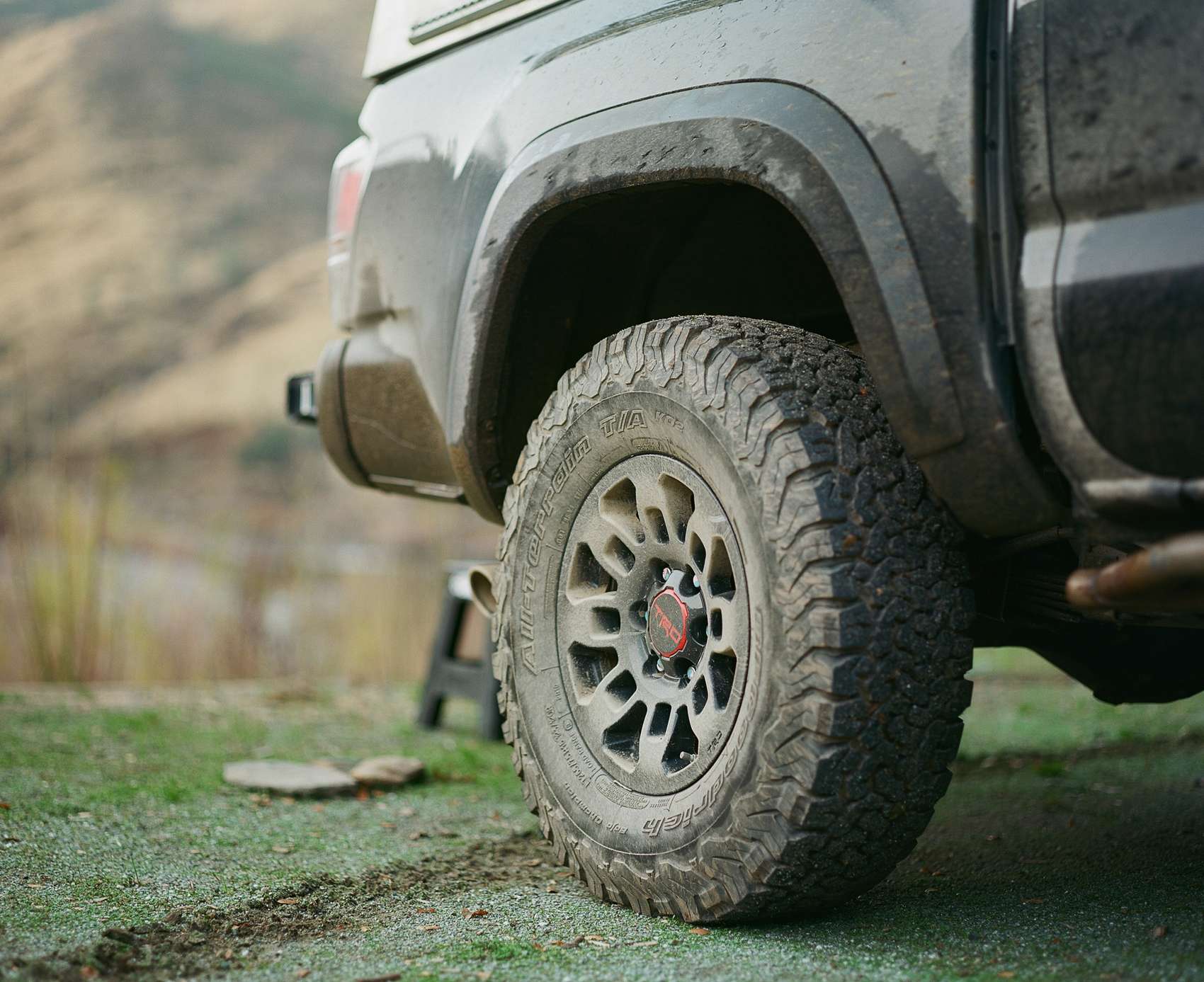 I forgot to eat both breakfast and lunch, so dinner was 9 eggs and 6 pieces of bacon. Baxter did not skip breakfast and had Baxter food for dinner. 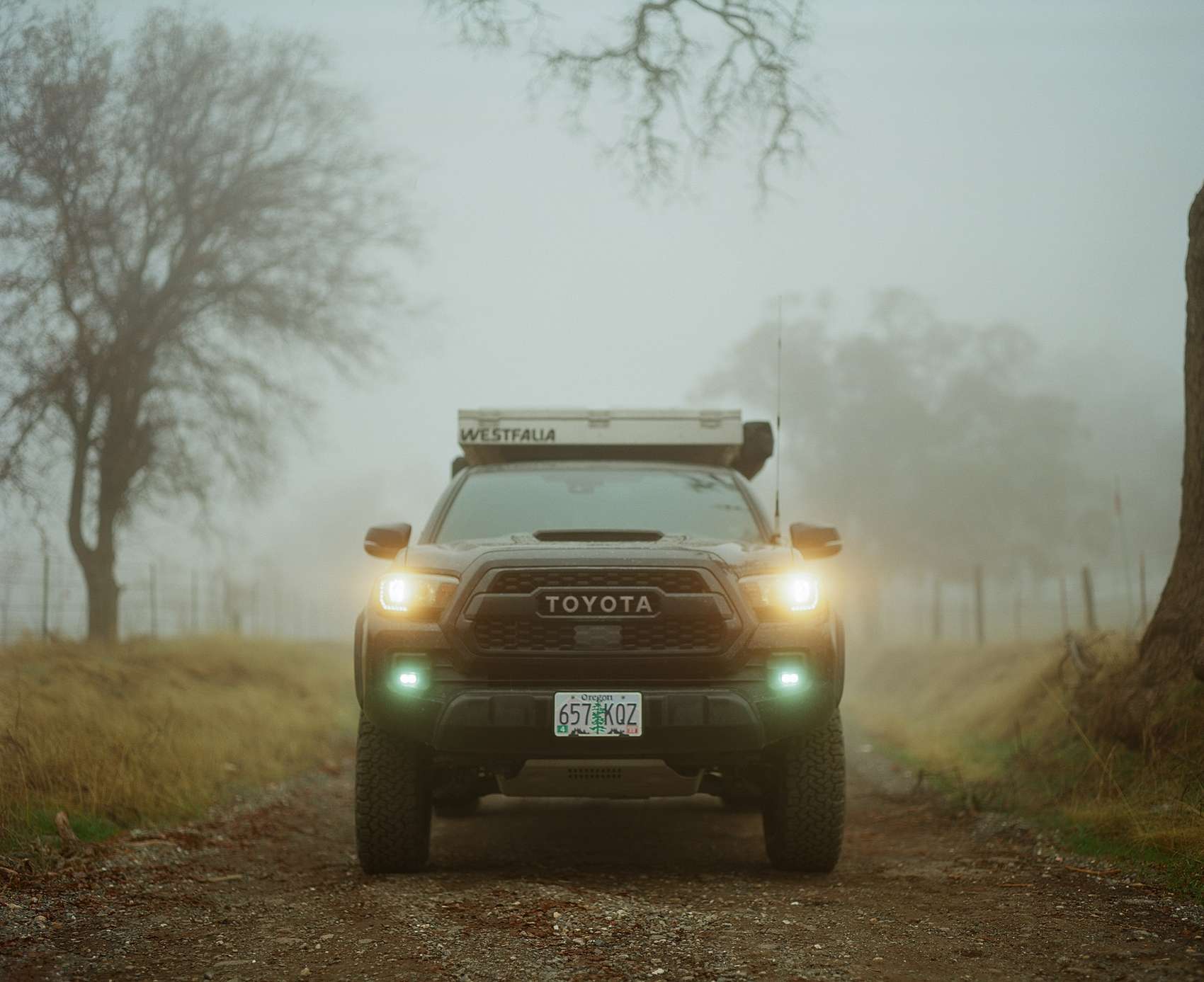 True to our usual camping style, we fell asleep around 7PM and got up at 5AM. I made myself a cup of coffee and Baxter had another bowl of Baxter food. The "popper" was packed up and we started heading back towards San Francisco just as the sun started to rise. 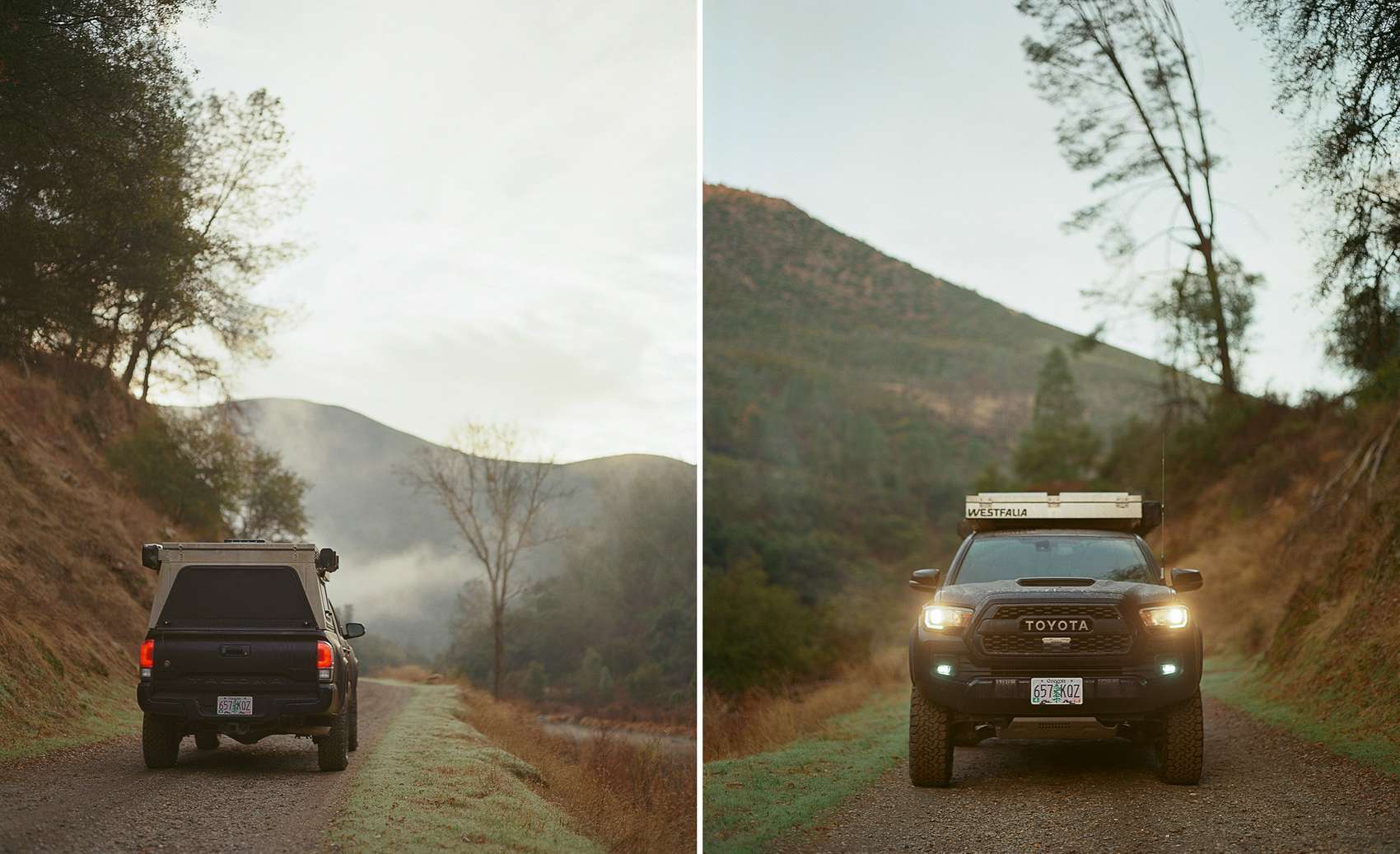 The drive out was familiar, but some fog moved in during the night to keep things interesting. We made it out fast. Before hitting the highway back to SF, I pulled over to put some air back in the tires because one of them is leaking pretty bad. I haven't figured out why, but the leak is slow enough that I just keep topping off every couple days and ignoring it.

I'm glad we made it out here to explore a bit, but doubt we'll visit this area again. It was too close to houses and parks to have a lot of options for exploring. It's the kind of place you visit, then never visit again. 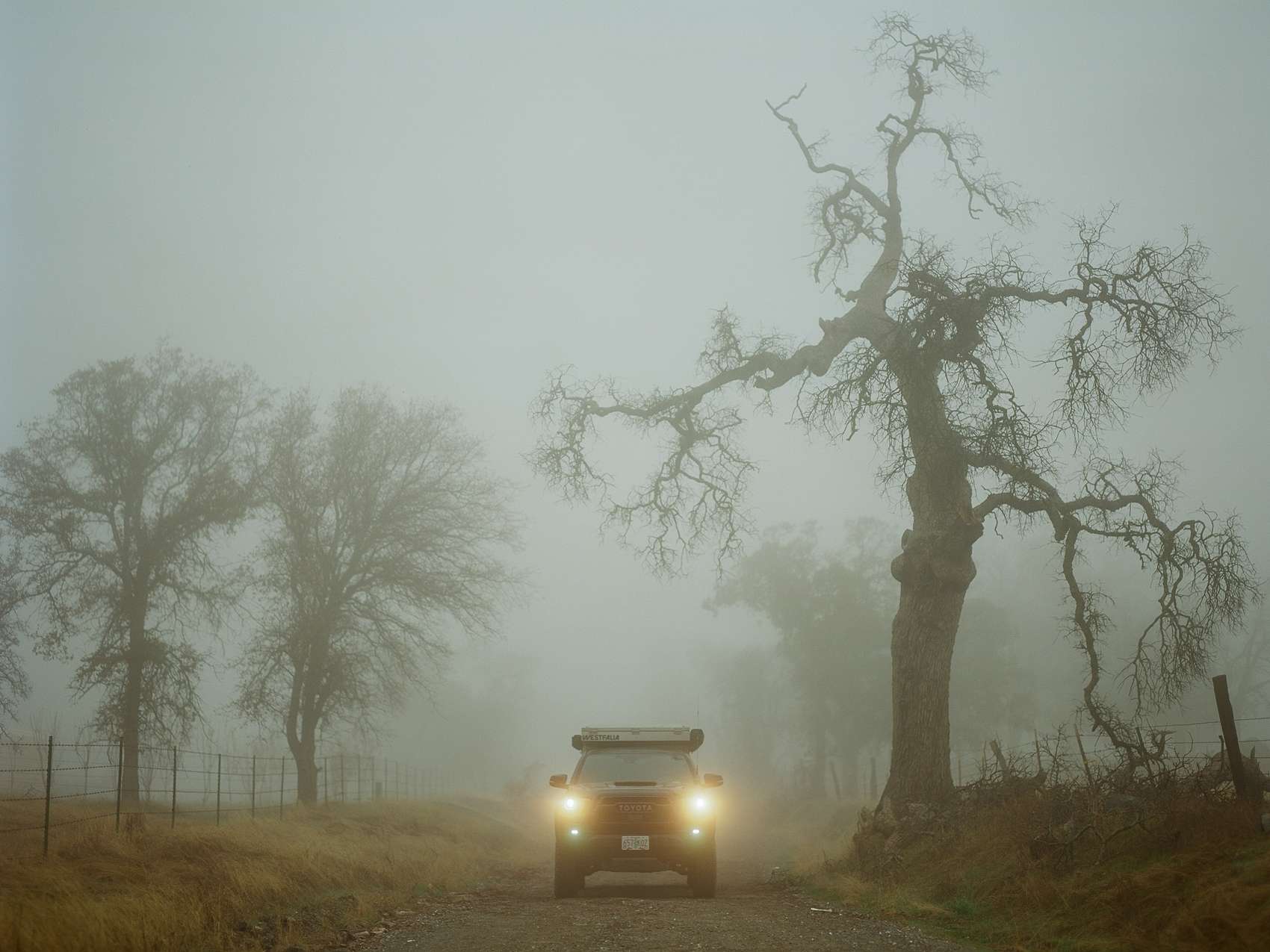 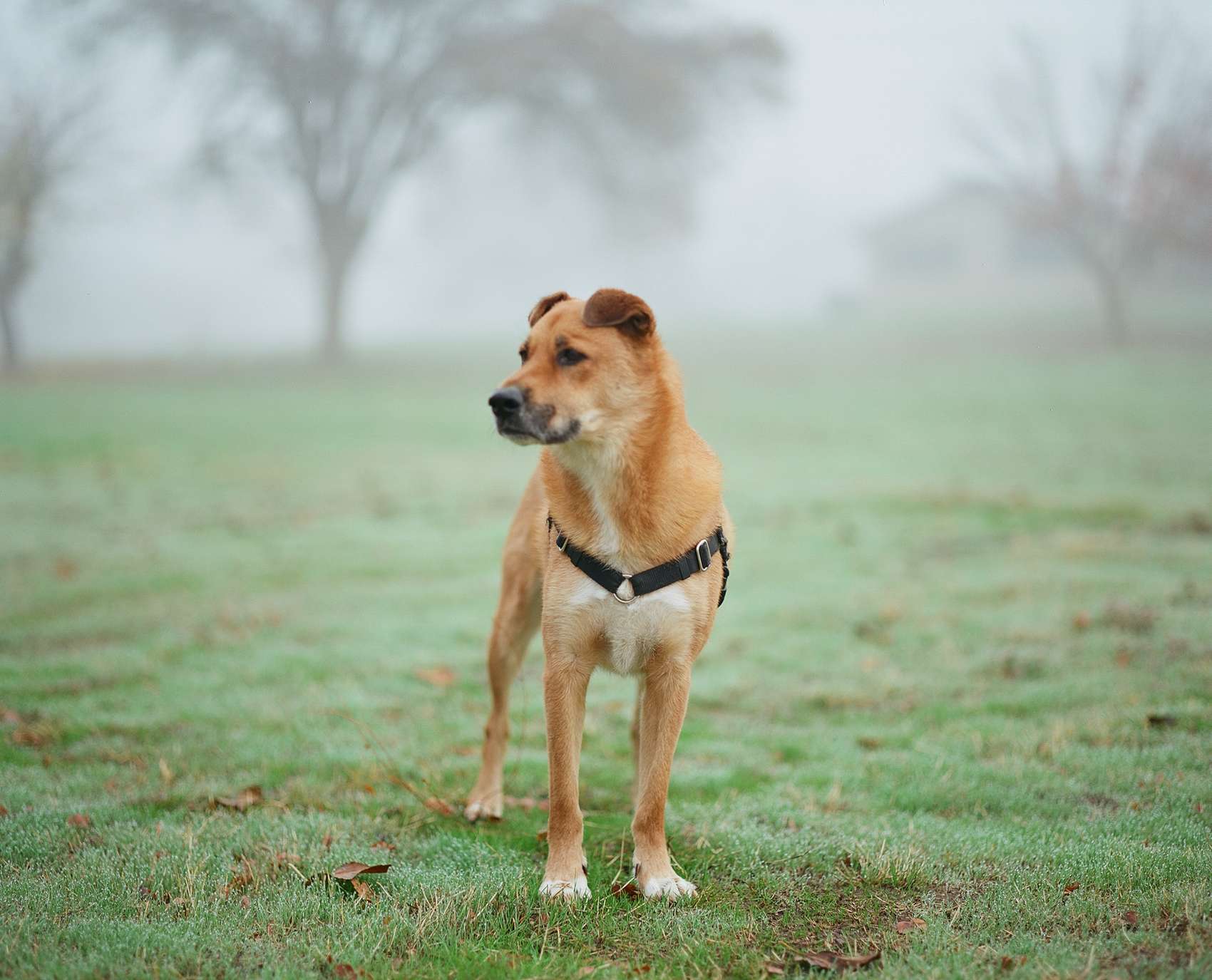